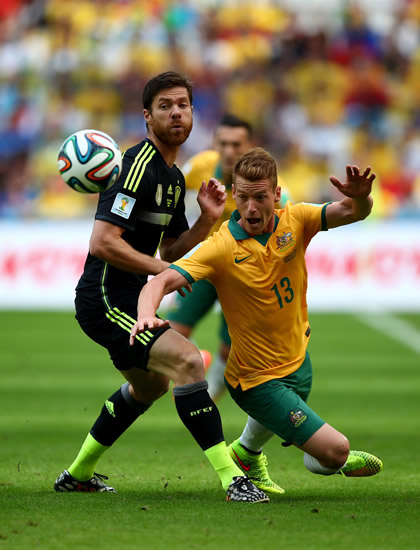 Spain at least ensured the end of their golden era finished with a 3-0 victory as they saw off Australia in something of a lacklustre Group B dead-rubber match in Curitiba.

David Villa, one of a number of stars from an historic generation who will now call time on their international careers, scored his 59th and final international goal with one last touch of class before Fernando Torres and substitute Juan Mata made it comfortable after the break.

With critics quick to sound the death knell for the Spanish tiki-taka style it was perhaps fitting two of the country's key players in their success over the last six years contributed to the opening goal.

However, it was less about the number of passes than the weight of the one which Andres Iniesta, winning his 100th cap, delivered inside left-back Jason Davidson to allow the overlapping Juanfran to cross for Villa to backheel past Maty Ryan.

Villa was replaced by Mata 10 minutes after half-time but his slow walk to the touchline was of a disappointed man resigned to the passing of time and not one milking the limelight one final time.

Upon reaching the bench he sat with his head in his hands for several moments - which in fact was an accurate representation of Spain's experience in Brazil as a whole.

The 32-year-old, who has left Champions League finalists Atletico Madrid to sign for New York City in the Major Soccer League - although he will be sent on loan to sister club Melbourne City in the interim - was making his first appearance of the tournament and he was one of Spain's brightest performers.

With captain Xavi injured and Iker Casillas dropped, meaning both have certainly played in their last World Cup and probably final international game too, Spain made seven changes in total.

That allowed Liverpool goalkeeper Jose Reina, who spent last season on loan at Napoli and is not wanted at Anfield, to make his World Cup debut nine years after first appearance for the national side.

He was barely troubled as the tournament's lowest-ranked side - missing suspended talisman Tim Cahill - failed to have any impact against the nation ranked number one before it all kicked-off after three successive major tournament triumphs.

But with the defending champions knowing they were heading home even before this encounter and many considering their long-term futures there was a real lack of spark.

Midway through the first half Villa sliced wide Iniesta's cross before his clever backheel teed up left-back Jordi Alba to fire straight at the goalkeeper.

That backheel was employed to more devastating effect in the 36th minute when Iniesta sent right-back Juanfran racing to the touchline and although his cut-back was slightly behind the unmarked striker Villa diverted in the ball around his standing leg.

Atletico Madrid midfielder Koke, expected to be a key figure in Spain's future rebuilding, had a low long-range drive tipped wide by Ryan but it was one of the old-stagers unlocked the Socceroos defence again.

Iniesta's through-ball split Australia's two centre-halves and Chelsea striker Torres - the man who began Spain's gold rush with the winner in the final of Euro 2008 - ran in from the left to slide home the second before Mata converted from close range with eight minutes remaining.