International retirements follow World Cups as night follows day, but when players – and captains – of the calibre of Philipp Lahm and Steven Gerrard call it quits, the world sits up and takes note. 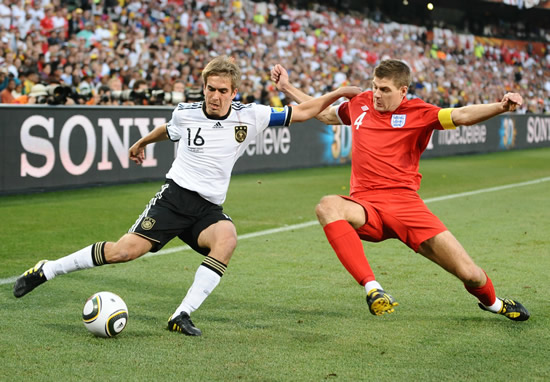 The tales of Lahm, 30, and Gerrard, 34, could hardly be more different from a team perspective; Germany are World Cup winners, England cast as flops – again. But individually they share plenty of common ground, one-club men who lead by example.

Jamie Redknapp, the former Liverpool and England midfielder, referred to Gerrard as the “best midfielder since Gazza” and claimed that England didn’t know how to use him to the best of his abilities. Gerrard used to play in the street as a kid with Gascoigne’s name on the back of his shirt.

He realised his dream and went on to play for six different England managers after being handed his debut by Kevin Keegan shortly before Euro 2000.

The plaudits came thick and fast. Gary Lineker referred to him as a “wonderful servant” and Rio Ferdinand marked him out as “incredible”. Zinedine Zidane, no less, hailed Gerrard as the “best in the world” in 2009.

Roy Hodgson, who managed him for club and country, added: “We have all been blessed to see Steven in an England shirt. He is not only a player to bring crowds to their feet with moments of brilliance; he was a tremendous captain and an exceptional role model for everyone who was fortunate to come into contact with him.”

Lahm’s international career was four years shorter than Gerrard’s yet he finishes with 113 caps, just one fewer than the England man. After taking into account Gerrard’s injuries, that says something about how much deeper into tournaments Germany tend to go compared to England.

Rather like Gerrard’s masterful strike against Germany in the famous 5-1 rout in Munich, Lahm began to truly blaze a trail on the international scene with his fabulous goal in the opening game of the 2006 World Cup on home soil against Costa Rica.

The tributes have been no less generous. “We will miss you on the team, my friend! Had a great time! Thank you Philipp,” said a Twitter message from Bastian Schweinsteiger, his likely replacement as captain.

“It will not be easy to replace Philipp Lahm as a player, as a person and as captain,” said Karl-Heinz Rummenigge, himself a giant of past German teams.

Lahm and Lionel Messi are both complete players but only one of them has been described by Pep Guardiola as “the most intelligent player” he has ever coached. It is not Messi. Another Barcelona great, Xavi, is also an admirer. “Lahm is a top player with a lot of personality and you can play him at the back, in the middle and he is good going forward. He is clearly not stopping in his pursuit to simply get better and better.”

Franz Beckenbauer’s tribute was double edged, in that he clearly feels Lahm has made the decision in his interests rather than Germany’s. “The team desperately needs him,” he said. “He is the leader of this squad. It will be very tough to replace him.”

Among the politicians, who are never slow to jump on the bandwagon, German chancellor Angela Merkel said of the player who took over as captain for the 2010 World Cup, when Michael Ballack dropped out through injury: “I want to take the opportunity to express my great respect for what he has done for the national team.”

Gerrard has accepted an ambassadorial role from the English Football Association. Lahm is clearly not short of political clout himself.