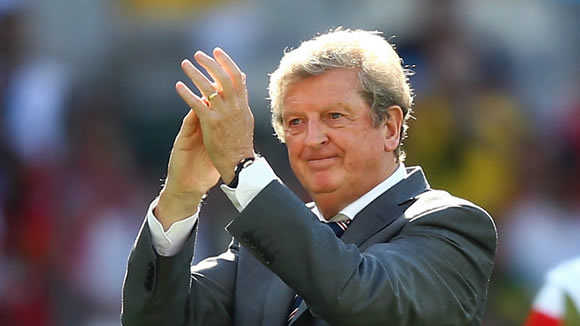 England boss Roy Hodgson felt his side deserved victory over Costa Rica after their World Cup campaign ended with a 0-0 draw in Belo Horizonte.

A miserable tournament in Brazil concluded in fittingly underwhelming fashion at the Estadio Mineirao as Costa Rica claimed the point they required to finish top of Group D and leave the Three Lions propping up the standings.

Daniel Sturridge, who had a good shout for a first-half penalty waved away, missed England’s best chance in the second half as Hodgson’s men failed to make the most of the opportunities they created.

Hodgson told ITV: “We showed today what a good team we can be. I’m disappointed not to finish with the victory, but I don’t think we could have asked for a much better performance.

"Apart from the first 10 or 12 minutes of the game, I thought we dominated totally, but we didn’t take our goal chances. If we had taken them, it would have been a comfortable victory.

"We created chances, that’s the important thing. Normally Daniel is so clinical, so I’m not that concerned, I know he’ll take the chances in the future.

"I thought we were unlucky not to win this game, but I’m pleased to have given the fans something to cheer.”

The England boss made nine changes from the team which started against Uruguay, and he was particularly pleased with how the defence, marshalled by Gary Cahill, ensured Costa Rica had very few opportunities.

"I thought they all did very well, I thought the whole back four was absolutely excellent,” he added.

"We restricted a team that has beaten Italy and Uruguay and topped the group and restricted them to almost no chances.

"I thought we dominated in midfield, we outplayed them in that area, we created chances, and the only thing didn’t do unfortunately was to take them, and that’s a great disappointment.”

Hodgson admitted later that England did not deserve to be cheered off following their dour goalless draw.

And even though Hodgson thought his team played well in Belo Horizonte, he conceded the team's World Cup performance as a whole did not merit such a send-off from the travelling support.

"We are very grateful for the emotional moment at the end where they showed their support," said the England manager, who has the full backing of the Football Association despite the team's poor showing in Brazil.

"We are so sad and disappointed for them because we know what they're going through.

"We had nothing to play for, and our fans appreciated that by giving us an ovation that, obviously, our results didn't merit."

Hodgson was impressed by Jack Wilshere, Ross Barkley and Adam Lallana, although the England manager conceded they still have work to do before they become top internationals.

"The midfielders, the young ones, showed they want to do the right thing, want to get on the front foot and be positive, and want to make things happen," Hodgson said.

"That's a very good thing. You accept they lose the ball sometimes or don't find the right pass, but at 18, 19, 20 we can't give them what Frank Lampard and Steven Gerrard have.

"We can only give them the opportunity to play and hope they get there."