The Germany manager, Joachim Löw, has called on the Mexican referee Marco Rodríguez to clamp down on the “brutal and crude” challenges that marred Brazil’s quarter-final success against Colombia and left Neymar with a back injury.

Rodríguez will take charge of the first World Cup semi-final, at the Estádio Mineirão, on Tuesday night with Löw having expressed sympathy for Brazil’s No10, who will be absent for up to seven weeks after Juan Camilo Zúñiga’s challenge fractured the third vertebra in the 22-year-old’s back. Löw claimed the injury was “very sad for him and the nation” but went on to criticise the frenzied nature of that quarter-final in Fortaleza, overseen by Carlos Velasco Carbello, and warned that talented creative players would be driven from the game if such aggressive tactics were permitted. 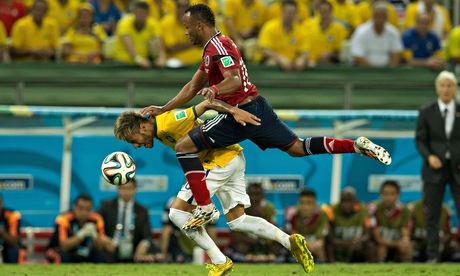 Brazil committed 31 fouls in that fixture, with Colombia contributing 23, and the focus has now been thrust on a Mexican official who missed Luis Suárez biting Giorgio Chiellini in Uruguay’s group victory over Italy. “In this World Cup the football is more about a physical dynamism, tough duels, players who will work and fight,” said Löw.

“I hope the referee tomorrow, Mr Rodríguez from Mexico, will clamp down on the kind of things we saw last Friday. That physical energy in the match against Colombia went beyond the limits one would expect from a game in Europe. When I saw that match … well, in Europe, 22 players wouldn’t have ended that match on the pitch.

“There were brutal fouls, people blocking opponents off however they could. It was really exaggerated. That’s what we saw on the pitch, so I hope these really brutal and crude fouls are stopped or we won’t see offensive players like Neymar or [Mario] Götze, [Mesut] Özil or [Lionel] Messi on the pitch and we’ll just see players who go out there set to destroy. This is a World Cup that’s full of dynamism and physical force but I’ve seen matches where that has gone over the limit.

“Colombia against Brazil was a real fight with numerous fouls from both sides: not just the one foul against Neymar but many others as well. You saw how many fouls there were from behind which were really dangerous for the players: slide tackles from behind and from the side. You have to protect the players when you’re a referee. That’s something that’s important for everyone working in football. You have to protect the attackers. They have been roughed up in a very bad way. I don’t think it was a good thing that we saw there.”

Löw’s opposite number, Luiz Felipe Scolari, believes Brazil have recovered from the shock of losing their stellar performer and that they possess the quality to overcome Germany and progress to the final. The Brazil squad have spoken collectively to their sports psychologist, Regina Brandao, who was drafted in by Scolari in the wake of the nerve-shredding penalty shootout success over Chile in the last 16.

“Neymar has left us and has left a lot of himself with us, and he’s taken a lot of us with him,” said Scolari. “We’ve left behind that phase of being sad. We’ve accepted he won’t be with us any more. After we accepted that, the way he spoke to the players made the squad understand that he had done his share. Now it’s up to us to do our share: myself, the other players and all the Brazilian people. We’ll be playing this match not just for ourselves but for our country, for everything we’ve ever dreamed of but also for Neymar and everything he’s done for us. Within our group we’ve accepted that and we’re focused.”

Brazil will also be without their captain, the centre-half Thiago Silva, after Fifa confirmed there was “no legal basis” to rescind his yellow card for unsporting behaviour during Friday’s win. Silva had appeared to run deliberately in front of the opposing goalkeeper, David Ospina, as Ospina attempted to kick downfield and was duly cautioned for the second time in the tournament, prompting the one-game ban. Likewise Fifa will not pursue action against Zúñiga for the knee in Neymar’s back which effectively left a nation in mourning, as Carbello had apparently witnessed the incident and did not deem it worthy even of a caution.

“That was a coward’s tackle,” Silva said. “I’m a defender and I know that kind of challenge is not normal. You can’t get the ball from someone by putting your knee into a player’s back. But Neymar has already done what he had to do. Now it’s up to the other 22 to go out there and do everything for victory. It’s made the group more united.”

His centre-half partner, David Luiz, will lead the team in his absence, with Bayern Munich’s Dante expected to deputise in the centre. Scolari may draft Luiz Gustavo into a three-man midfield, or recall Chelsea’s Willian on the right with Neymar not expected to attend the game as he continues his rehabilitation in São Paulo.