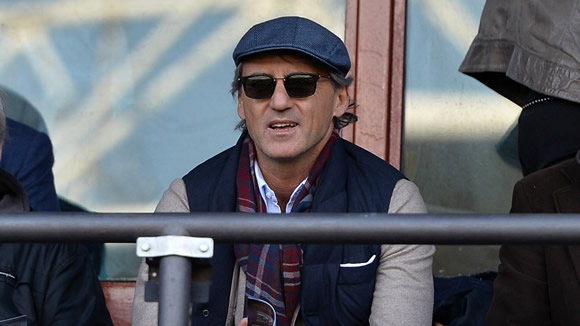 Roberto Mancini is flattered by speculation that he could be the next coach of Italy.

Mancini stepped down as coach of Galatasaray last month and is among the reported candidates to replace Cesare Prandelli, who resigned as national boss after the Azzurri's first round elimination from the World Cup.

"To see that Azzurri fans want me as coach makes me proud," Mancini said in an interview to Corriere dello Sport. "It means that I have worked well and I have also left something good in terms of playing style and image.

"However, it is just rumours and I have not heard from anyone.

"It's nice to be among the candidates, as a good nationalist, in the sense that I am proud of my roots when I am abroad.

"Even at Manchester City I was happy to put the Italian brand on the Premier League.

"To get achievements abroad appeals to everyone, we have many coaches who have achieved success both in Serie A and elsewhere.

"I repeat that I would love to coach at national level.

"I think it is part of the aims of being a coach."

Prandelli was this week appointed as the new boss at Galatasaray and Mancini believes the 56-year-old can be a success.

Mancini led Gala into second place in the Super Lig behind Fenerbahce and also won the Turkish Cup, but left after one season in charge.

"Prandelli will be fine," he said. "He will work at a big club and will fight for the title, being able to take advantage of pre-season preparations.

"I arrived during the season and I could not do more.

"Prandelli has done well to accept (the post), he will have a good experience with players like (Wesley) Sneijder and (Felipe) Melo."

Prandelli, who had two years left on his contract with the Italian Football Federation, guided Roma and Fiorentina before replacing Marcello Lippi at the helm of the national team in 2010.

He led the Azzurri to the final of Euro 2012, where they lost to Spain, and a third-placed finish in last year's Confederations Cup.