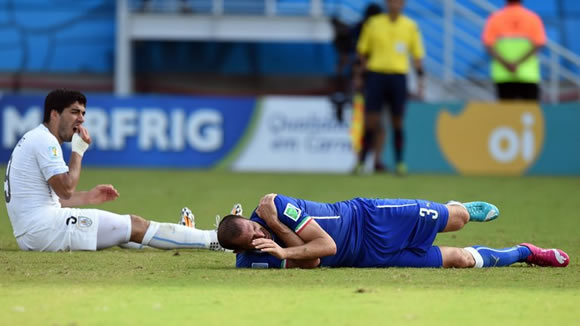 FIFA has opened disciplinary proceedings against Luis Suarez after the Uruguay striker appeared to bite Italy's Giorgio Chiellini during their World Cup clash on Tuesday evening.

The incident occurred towards the end of Uruguay's 1-0 win - which sent them through to the last 16 at the expense of Italy - with the Liverpool forward seemingly leaving teeth-marks on the defender's shoulder.

Suarez and the Uruguayan FA now have until 9pm (BST) to "provide their position and any documentary evidence they deem relevant".

"FIFA can confirm that disciplinary proceedings have been opened against the player Luis Suarez of Uruguay," FIFA said in a statement.

FIFA's disciplinary code sets a maximum ban of 24 matches or two years, but the longest ban in World Cup history was eight games for Italy's Mauro Tassotti for breaking Spain's Luis Enrique's nose in 1994 with an elbow.

Suarez has attempted to defend himself following the incident, telling Uruguayan television: "These situations happen on the pitch, we were both just inside the area, he struck me in the chest with his shoulder and he hit me in the eye as well.

"These are things that happen on the pitch and you shouldn't attach so much importance to them.

"I'm very happy to have qualified. We are taking each game as it comes, we know that we're in a difficult situation, we're at our limits now."

Suarez has twice been banned for biting opponents - for 10 matches in 2013 for his clash with Chelsea's Branislav Ivanovic and in 2010 he was given a seven-game ban while playing for Ajax for sinking his teeth into PSV Eindhoven's Otman Bakkal.

FIFA's disciplinary code allows action to be taken retrospectively via video evidence even if the incident has been seen by the referee.

Chiellini tried to show referee Marco Rodriguez the mark but no action was taken, and he believes the authorities must now look back at what happened and punish Suarez.

He told Sky Italia: “Suarez has bitten me and the referee saw it, but then there is the need to have the courage to take decisions.

"We will see if there is the courage to utilise the TV images to ban him.”

Uruguay manager Oscar Tabarez insisted he had not seen the incident but claimed that Luis Suarez "is the target of certain sections of the press".

"I would like to see it first," said Tabarez. "If it happened then I think the referee had to have seen it first. I didn't see the incident and I don't want anyone to speak for me about it.

"Suarez, in addition to errors that he may have made, is a target for certain sections of the media."

"If we believe people are attacking him, as has happened in this press conference, then we're going to defend him," he said.

"He's a vital player, a very important person to the group."

"I have watched the incident several times on television,” said Boyce.

"There is no doubt Luis Suarez is a fantastic footballer but once again his actions have left him open to severe criticism.

"There is no doubt that FIFA must investigate this incident very seriously and take whatever action is deemed necessary.”

Italy boss Cesare Prandelli - who went on to resign - confirmed he had seen the bite marks.

He said: "I didn't see Suarez biting him but I saw the bite-marks on his shoulder but the referee's assistants were so busy they didn't see anything.

"It's a shame, it's a real shame that it turned out like this."