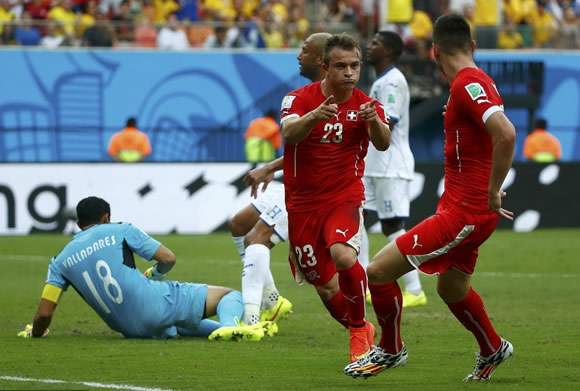 Shaqiri scored twice in a dominant first-half Swiss display and while Honduras rallied after the break, the talented Bayern Munich midfielder put the result beyond doubt with 19 minutes left to play.

France's 0-0 draw with Ecuador means they go through as group winners and earn a kinder draw against Nigeria in the next round.

Argentina will be favourites for the last 16 tie but Ottmar Hitzfeld's side will take great confidence from an impressive counter-attacking performance in which Shaqiri and Josip Drmic caused problems throughout.

Switzerland's first chance arrived in the fourth minute when Drmic played a dangerous ball across the box and it was only an excellent reaction save from Noel Valladares that prevented Shaqiri from breaking the deadlock.

Two minutes later, Shaqiri again tested Valladares but this time it was the Swiss midfielder who came out on top.

Shaqiri picked up the ball on the right-hand corner of the penalty area before drifting inside on to his left foot and unleashing a stunning strike into the top corner.

The goal was no less than Switzerland deserved with Honduras struggling to gain a foothold in the contest.

The South Americans were presented with a chance to equalise, however, when Switzerland failed to clear a corner and the ball fell to Brayan Beckeles but the defender sliced wide.

Honduras were made to rue that miss as Shaqiri doubled his and Switzerland's advantage shortly after the half-hour mark.

Drmic played an incisive pass to Shaqiri, who broke through the Honduras defence before picking his spot with a composed finish into the bottom corner.

Honduras continued to give the ball away too easily and Switzerland could have made it three before the interval.

This time Shaqiri turned provider, slipping Drmic through on goal but Valladares was quick off his line to shut down the shot.

Switzerland made a sluggish start to the second period and were fortunate not to concede almost immediately when Jerry Bengtson was left free at the back post.

Bengtson dived to the ground and tried to steer the ball in with his head but the forward failed to make contact and Switzerland were spared.

Honduras continued to pour forward and carved out another chance moments later as Juan Carlos Garcia slid through Bengtson, who did well to round the keeper but his shot was cleared off the line by Ricardo Rodriguez.

Switzerland were riding their luck and were fortunate not to give away a penalty shortly after the hour-mark when Johan Djourou bundled Jerry Palacios to the ground in the area.

Honduras had gained no reward for their second-half pressure and in the 71st minute Switzerland - and Shaqiri - made their opponents pay.

One long ball forward found Drmic, who skipped past Victor Bernardez before teeing up Shaqiri to slide the ball home for his hat-trick.

Honduras should have pulled a goal back with ten minutes to play when Bengtson directed a header straight at the goalkeeper.

With the result secured and qualification guaranteed, Shaqiri was substituted to a standing ovation with four minutes remaining. The last 16 and Argentina await.