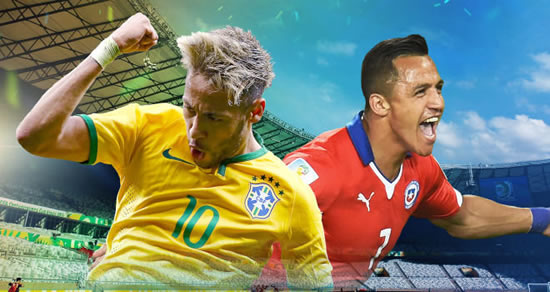 Brazil have brushed off claims in the Chilean media that English referee Howard Webb might favour the hosts in the all-south American showdown in Belo Horizonte on Saturday.

Webb was also the man in charge when Brazil beat Chile 3-0 at the same stage of the 2010 World Cup in South Africa.

There was no controversy in that game - in fact the only criticism of Webb was that he could have awarded Brazil a penalty - but nonetheless media outlets in Chile fear the hosts will get an easy ride.

That feeling has been doing the rounds since the opening match of the tournament against Brazil when Brazil were awarded a penalty by Japanese official Yuichi Nishimura for what was a blatant dive by Fred.

Brazil team spokesman Rodrigo Paiva said any such suggestions were disrespectful and "immature".

Paiva told the pre-match news conference: "This kind of pressure I think is ridiculous.

"Brazil doesn't need a referee to win the match and you should respect a little bit more the Brazilian national team and the Brazilian people."

Brazil coach Luiz Felipe Scolari is under growing pressure to pick Manchester City midfielder Fernandinho in his starting line-up when the hosts take on Chile in their first knockout match on Saturday.

Scolari's side looked unconvincing in long spells in their Group A games, but their best period came in the second half of the 4-1 win over Cameroon when Fernandinho had been sent on for Tottenham's Paulinho.

Former players and pundits in the Brazilian media have been hotly debating the best XI as the pursue their dream of a final in the Maracana, and by common consent Fernandinho is the holding midfielder of choice for the showdown in Belo Horizonte.

Scolari was giving little away in his pre-match press conference on Friday, but for the City player it is all going right.

He said: "I've always dreamed of playing in the World Cup and wearing the Selecao jersey, but I knew how difficult that was, what with me playing in Ukraine for Shakhtar.

"Last year, though, when I moved to England and began playing in a much bigger league with a much higher profile, I could see things coming together for me. I fought hard, chased my dream and got the call-up for the friendly with South Africa in March.

"Everything I did from June 2013 onwards was with the goal of making it here to the World Cup."

Scolari, who was coach when Brazil last won the World Cup in 2002, admitted that the tension was building now that it is a case of do-or-die for the hosts.

He said: "It is normal for us to be anxious especially now in the knockout stage where we cannot lose.

"We become more afraid, more nervous, it is normal. Not because it is in Brazil but because it is a World Cup. You only get the chance to get to the final if you win."

Fernandinho's hopes of starting will have been boosted by the fact he also scored a goal against Cameroon despite his main responsibility being in defence.

He added on www.fifa.com: "Here in Brazil, we have what we call a primeiro volante: a holding midfielder whose job is just to defend.

"But most of us play our football in Europe now and we're used to getting forward too. Midfielders there also create the play and get into scoring positions. Maybe that's the reason why we've got people who can play in that position and yet still get forward to score and start moves too."