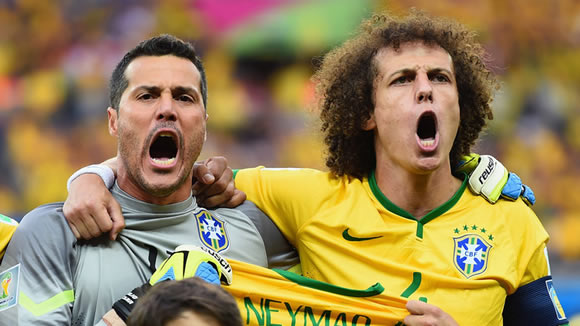 David Luiz and Julio Cesar sent their apologies to the people of Brazil after the World Cup hosts lost 7-1 to Germany in the semi-finals.

Brazil had hoped to reach Sunday’s final at the Maracana but their dream became a nightmare as Germany ran riot in Belo Horizonte, storming into a 5-0 half-time lead before inflicting further damage after the break.

Luiz wore the captain’s armband in the absence of the suspended Thiago Silva and was heartbroken as he spoke to reporters after the final whistle.

"Apologies to everybody, apologies to all the Brazilian people," said a tearful Luiz.

"I just wanted to see my people smile. We all know how important it was for me to see all of Brazil be happy, at least because of football. They were better than us. They prepared better. They played better.

"It's a very sad day but it's also a day from which to learn."

Goalkeeper Cesar was just as stunned by what had happened and admitted it would take some time to recover, but he also congratulated Germany for a magnificent performance.

"Honestly, it's hard to explain," Cesar told reporters. "You can't explain the inexplicable.

"It was beautiful up to here. I thank the Brazilian people and the fans are to be congratulated for all the support they gave us.

"The players...are going to apologise but they (Germany) were strong, and we have to acknowledge that. After the first goal we just had a blackout, nobody expected it.

"We will go home, hug our families. And thank the fans. We got close but we couldn't, that's it."