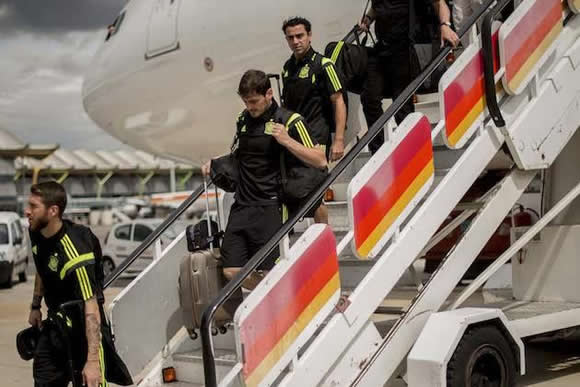 Spain's reign as world champions ended last week when they lost their second match in a row at the World Cup and were subsequently eliminated. La Roja haven't gone home this early since the 1998 tournament in France.

So, in a fitting way to end their miserable experience in Brazil, the plane that the Spanish side used to fly to Madrid on Tuesday was struck by lightning upon descent at Adolfo Suárez Madrid-Barajas airport.

The Iberia flight, which touched down at about midday local time (1000 GMT) in the Spanish capital, was hit by a bolt of lightning but there were no negative consequences for the aircraft or the passengers, a spokeswoman for the airline confirmed.

So let's rehash what went wrong for Spain over the last two weeks:

• They get thrashed 5-1 by the Netherlands in the opening match.

• Chile ensures their elimination with a 2-0 victory in the second match.

• Vicente Del Bosque subs off David Villa in his final international appearance for Spain and claims he didn't know it was the end for the country's all-time leading scorer.

• Jordi Alba tells a journalist, "Next time I’ll rip your head off … I’m warning you."

• Lightning strikes their plane just before they arrive home.

How do you say "Murphy's Law" in Spanish?