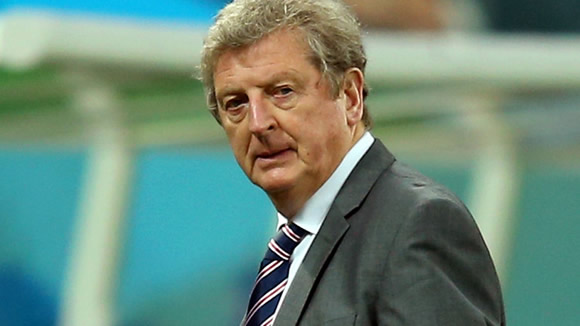 Roy Hodgson has reiterated his desire to stay on as manager following England's return home after their World Cup exit.

Hodgson and his squad of 23 players touched down in England on Wednesday after their worst World Cup campaign in history.

England finished bottom of Group D with just one point.

Hodgson refused to walk out on England after their early exit was confirmed last week and the 66-year-old has had no change of heart, despite the dull draw against Costa Rica.

Hodgson snapped back at one reporter when it was pointed out that Italy manager Cesare Prandelli had offered to resign following his team's elimination from the tournament on Tuesday.

"I think there is an interesting group of players here to work with. And I get no feeling whatsoever that any of them will want me to resign.

"I don't want to be compared to other people.

"The reason I'm staying on is that I'm not a quitter, I believe in this team and that the FA seriously want me to keep doing this job, as do the players, so therefore I will continue to do it and I'll try and lead the team to Euro 2016
and try to get some good results."

Hodgson will, over the next few weeks, hold discussions with members of Club England - the body that oversees the day-to-day running of the national side.

It is understood that there will be no requirement for Hodgson to submit a full report to the organisation regarding England's World Cup failure, though.

When the "grieving process", as Hodgson put it, is over, the England manager will sit down and analyse videos of the team's failings in Brazil.

"Our video man will be cutting that up now although he won't have a chance to show me that for a while," Hodgson said.

Hodgson wants Steven Gerrard and Frank Lampard to continue playing, although he appears open to the idea of resting them for certain matches.

He said: "It would be nice if they don't formally retire because when players do that they disappear from England selection.

"(We could) leave it to a dialogue perhaps whereby at any moment in time I could speak to one of them and say 'look, do you want to play in this game, are you up for it?'. That's how I'd really like to see it."