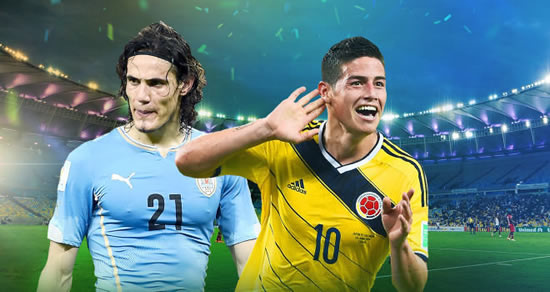 Colombia coach Jose Pekerman preferred to focus on the Uruguayan collective rather than Luis Suarez when asked about the impact his suspension could have on their World Cup last-16 clash.

FIFA handed down a four-month ban from all football activity to the Liverpool striker after he bit Italy defender Giorgio Chiellini during Uruguay's 1-0 win on Tuesday.

That result saw them progress at Italy's expense, but the absence of Suarez will surely be felt when they take on Colombia at the Maracana on Saturday.

It was a subject raised with Los Cafeteros coach Pekerman ahead of the last-16 clash, although not one he was keen to comment on.

"We think of Uruguay's strengths and they're a top-notch opponent," the Colombia coach said.

"They're very experienced with a lot of ability and a wonderful coach who has done well in recent years.

"They were always going to be a difficult opponent. I've concentrated on the problems we've had with Colombia, with injuries, but we know this will be a difficult match against a very good team."

Pekerman refused to be drawn when asked if Suarez's absence had seen him alter his tactics - "Uruguay are highly respected and have top-notch players" - and was coy when asked if the severity of the sanction was fair.

"Listen, currently this is a very sensitive, very delicate issue," he said. "I understand it but our concern is Uruguay as a team. We are working in order to play against them tomorrow, that's all."

"The most important thing now is to continue our work," the Nice 'keeper said.

"Each national team has its own way of playing and its own line-up, and we're concentrating on ours and what Colombia can show.

"We have to keep believing in what we can do."