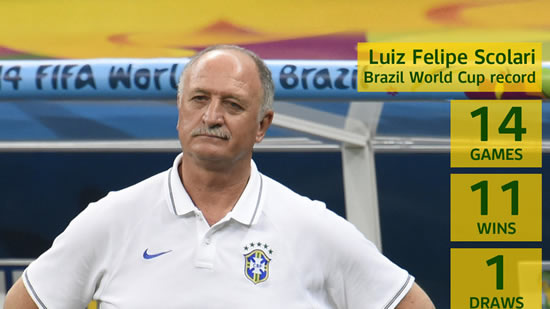 The Confederation of Brazilian Football has confirmed that Luiz Felipe Scolari has resigned as Brazil head coach.

Scolari’s contract ended after the World Cup and he had said that he would let the CBF decide his fate after Brazil were beaten 3-0 by Netherlands on Saturday in the third-place play-off.

The Dutch defeat followed Brazil's 7-1 humiliation by Germany in the semi-finals, the worst result in their World Cup history, and the first time they had lost a competitive match at home since 1975.

Scolari's departure was announced following a meeting with CBF president Jose Maria Marin when it was decided that the 65-year-old's contract would not be renewed.

A statement from the CBF read: "Coach Luiz Felipe Scolari and his fellow coaching staff surrendered their positions to the board of the Brazilian Football Confederation.

"The resignation was accepted by president Marin, who was keen to thank all the coaches and players and, by extension, the Brazilian fans for their support throughout the World Cup campaign.

"Scolari and his entire coaching staff deserve our respect and gratitude. They were responsible for returning to the Brazilian people your love for the team, despite not having achieved our greatest goal."

Scolari led Brazil to their last World Cup triumph in 2002, when they won the competition a record fifth time, beating Germany 2-0 in the final.

Since his return to the manager’s post in 2013, Brazil have won 19, drawn six and lost four of his 29 games in charge.

Scolari insisted after Saturday’s loss to Netherlands that Brazil could still take some positives from their campaign.

He said: "We must praise our players even though we came up short at the end of the tournament. We didn't play badly today.

"When a team let in seven and then concede within two minutes of the next game, it changes your perspective.

"This generation does not have to be scarred. We were in the top four teams in the world and won the Confederations Cup last year.

"I don't see how I can criticise my team today. We played well, battled back after going behind, had chances.”

Former Corinthians boss Tite, Sao Paulo coach Muricy Ramalho, and Brazil U20 manager Gallo are among those in the running to replace Scolari.