World Cup 2014: Robin van Persie appears to give his bronze medal to eccentric Netherlands fan moments after being handed it by 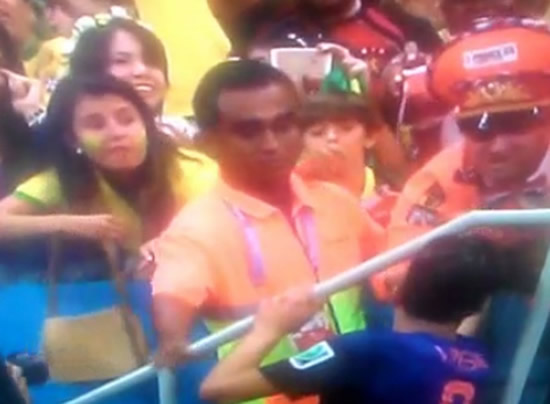 The Manchester United striker handed his captains armband to a man dressed in an orange military uniform, but his bronze medal was nowhere to be seen

Robin van Persie gave away his captain's armband and possibly his World Cup bronze medal to a Dutch fan in a gesture that was simultaneously kind hearted and telling about how the award is viewed.

The Netherlands beat Brazil 3-0 in Brasilia with the Manchester United striker among those on the score-sheet.

It was a result that saw the Netherlands officially finish the 2014 World Cup in third place but the bronze medal position is arguably the least coveted honour in all of international football.

So perhaps it wasn't a surprise to see Van Persie immediately head to the crowd to celebrate. The Netherlands' captain went over to the stands where he appeared to pass his medal to a bizarrely dressed Dutch supporter who was wearing an orange military outfit complete with large hat and Netherlands flag bow-tie. 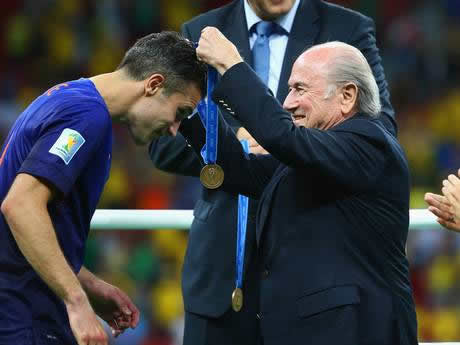 And just moments later gives it away

As Van Persie handed him the armband, he was neither holding his medal nor wearing it around his neck, and the supporter kissed Van Persie's hand and touched the striker on the head in a show of thanks.