A nation reacts: How the German and Argentine press reported the World Cup final 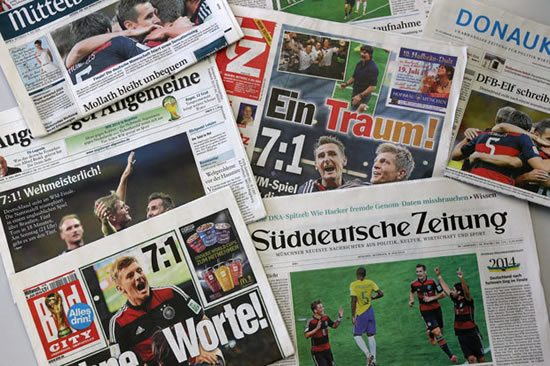 We take a look at how the German press have reacted to the 'Weltmeister' - world champions - and the Argentinian response to defeat.

There is the cup! Gotze, you footballing God! We are world champions. What a battle and what a win. Now Jogi [Joachim Low] is the coaching hero - good job he extended his contract before the World Cup until 2016. We take a bow to the players with captain [Philipp] Lahm, goalkeeping giant [Manuel] Neuer, goalscoring world champion [Miroslav] Klose and goalpoacher extraordinaire [Thomas] Muller. It was a gala performance, enchanting fans the world over. But when they had to, they also fought the pain barrier, like against Argentina.

This World Cup is the result of a long-planned and meticulous striving for success. The foundations for this victory were laid a good 10 years ago. Without the investment in training, skill and technique, in youth and centres of excellence, this triumph - the first since 1990 - would not have been possible. The Maracana title is therefore a reward for the courage to pursue this new direction. 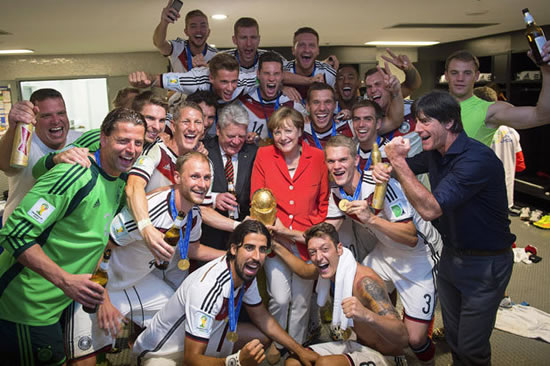 The team tried to impose their 'Jogi Bonito' - beautiful Low football - in the final. They showed respect, but did not shirk at a defence made of granite. Okay, so they did not have every single lightning Lionel Messi-inspired counter-attack under control, but they largely held the upper hand on the night's dramaturgy.
Joachim Low had got this highly gifted selection of players totally focused on the tournament. 1954, 1974, 1990, 2014 - that is now worth four stars on the shirt. And this is the merit of the coach, who at the age of 54 has completely rediscovered his coaching, at an age when many might say they had already seen it all.

IT IS TRUE (Die Welt, Germany)

What a game, what a battle, what drama: Germany and Argentina deliver a pulsating World Cup final in Rio de Janeiro. Substitute Mario Gotze then scores a dream goal, the decisive 1-0. The Nationalmannschaft can finally sew the fourth star onto their shirts. The rest is just endless celebration.

Mario Gotze emerged as the hero of a thrilling World Cup final in the 113th minute. His dream goal, taking the ball perfectly on his chest, turning and sending the ball in precisely with his left foot - Gotze wrote history and fired Germany to the title. His 11th international goal in his 35th game, maybe one of the most beautiful and certainly the most significant. Thanks to Mario Gotze, the Nationalelf are world champions for a fourth time after 1954, 1974 and 1990.

Mario Gotze picks our fourth star out of the sky. Joachim Low and Germany's footballers fulfilled their World Cup title mission in a thrilling final. Ecstatic and exuberant, the World Cup warriors in Black-Red-Gold celebrated after super-sub Mario Gotze's goal in the Maracana football temple on Sunday night, after winning a fourth World Cup against an Argentina side led by Lionel Messi. After 1954, 1974 and 1990, it was a historic triumph - the first for a European nation on the American continent.

After the frustration of Messi, Masche [Javier Mascherano] and co at not bringing home the Cup after being so close, the team deserve the best reception. They played a great final against Germany, were denied a penalty and wasted chances in the 120 minutes but the taste remains in the soul. Sadness will not cover everything.

It could not be. The team led by Alejandro Sabella was greater than the European side but the fact they played a third extra time in succession counted against them. Argentina paid too dearly for their lack of firepower and lost 1-0 as a result of Gotze's goal after seven minutes of the second half of extra time.

[Gonzalo] Higuain, [Sergio] Aguero and [Rodrigo] Palacio missed several clear scoring situations; while the "Teutonic" side took advantage of the only clear chance they had. In addition, the Italian referee clearly hurt the national team, ignoring a clear penalty for Higuain which in turn required the dismissal of goalkeeper Neuer. In the mythical stadium 'Maracana', Messi was absent and did not show up to what was expected. Nevertheless, those led by Sabella had a superb World Cup.

FAILED DREAM: ARGENTINA ARE LEFT WITH NOTHING AFTER THE FINAL (La Razon, Argentina)

The dream is over. This time, the difference from only four days ago against Holland, the tears are of sadness. It was seen in the downcast faces of thousands of Argentinians that were in the Maracana. And the image was translated to the field of play. From the coaching team comforting Marco Rojo, the same as Pablo Zabaleta. The feeling is of sadness, but at the same time, there is nothing to reproach. Against Germany, Argentina had a great game even though it wasn't enough: a Mario Gotze goal in the second half of extra-time left the national team with empty hands, while the European side celebrate the fourth title in their history.

The Argentina national team couldn't secure their third title, a dream on hold for 28 years for 40 million fans, after losing 1-0 to Argentina in the World Cup final at the mythical Maracana stadium in Rio de Janeiro.

Argentina, champions in 1978 and 1986, lost with dignity in a close and even game, a final that will go down in history as the second time that the team have lost with the blue shirt against the same opponents.