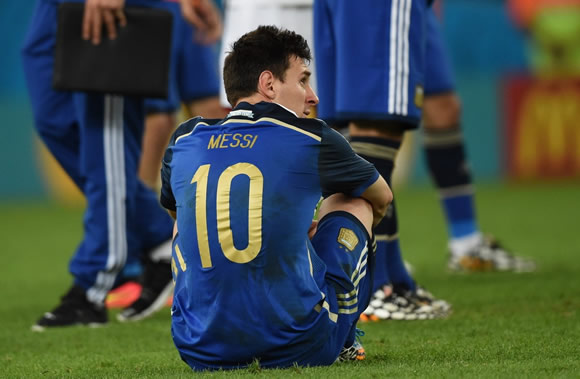 Argentina icon Diego Maradona feels Lionel Messi did not deserve to win the Golden Ball following his performances at the World Cup.

The Barcelona star beat the likes of Thomas Muller, Arjen Robben and James Rodriguez to the prestigious individual award after scoring four goals in seven performances at this summer's tournament and guiding his team to the final, yet Maradona feels the 27-year-old only won it for commercial reasons.

"I would give him heaven if possible," Maradona said during his show on Telesur. "But it's not right when someone wins something that he shouldn't have won just because of some marketing plan."

Maradona then went on to voice his disappointment with Argentina's 1-0 defeat in Sunday's final against Germany following Mario Gotze's goal in extra time.

"I feel sorry for my country. Mario Gotze's goal really hurt. There's a huge sadness in my heart that we lost the final," he said. "All things put together, I think Argentina deserved at least penalties. That Germany won was the result of a misunderstanding in the Argentine defense."

The 1986 World Cup winner also had his say on Alejandro Sabella's decision to replace Ezequiel Lavezzi with Sergio Aguero at halftime and argued that the Argentina boss got things wrong.

"I don't understand the substitution of Lavezzi," Maradona said. "He was phenomenal down the wing. Kun Aguero didn't have the same impact. It was not his tournament."