West Germany lifted the FIFA World Cup™ for the third time in 1990 as they avenged their Final defeat by Argentina four years earlier, overcoming the holders 1-0 in Rome. Their victory was a real triumph for Franz Beckenbauer, who became only the second man to win the world crown as first a player and then a coach. 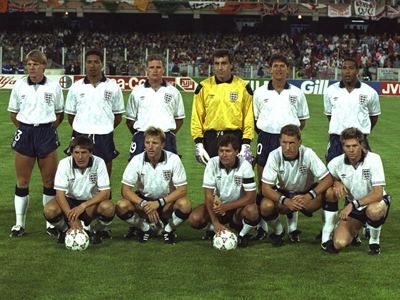 The 1990 finals set an unwanted record as the lowest-scoring tournament, with just 2.21 goals per game, but there was certainly no lack of colour or drama. The Opening Match alone provided one of the FIFA World Cup's most memorable upsets, with Cameroon beating Argentina at a magnificently revamped San Siro. With Roger Milla enjoying his finest hour, Cameroon would go on and make history.

This was Italy's second time to host the FIFA World Cup. Fifty-six years on from their 1934 triumph on home soil, they spared no expense in ensuring the competition was a success. Ten stadiums around the peninsula received a complete facelift while two vast new arenas were built in Turin and Bari. There was a stickman mascot named Ciao yet the real symbol of the tournament for Italian fans soon became Salvatore 'Toto' Schillaci, a striker without an international goal to his name before June 1990.

Neutrals' favourites
The tournament's first round went largely as expected, with the notable exception of newcomers Costa Rica beating both Scotland and Sweden to reach last 16. The Republic of Ireland, managed by former England defender Jack Charlton, added another touch of romance by advancing to the last eight on their debut appearance. Those achievements had nothing on Cameroon's run to the quarter-finals, however. The Indomitable Lions were the neutrals' favourites and in the 38-year-old Milla had a genuine star. 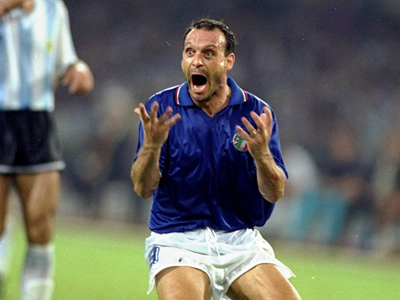 The veteran striker had to be persuaded to come out of semi-retirement on Reunion Island to play in Italy but after stepping off the bench against Romania, he scored the two goals that took Cameroon into the second round. When he then repeated the feat against Colombia - cue that famous corner-flag shuffle - Africa had its first quarter-finalists. They might have gone further too save for two Gary Lineker penalties that rescued England in a quarter-final where Cameroon led 2-1 with ten minutes to go. Still, the Lions' roar rang around the world - and Africa would have a third team at the next finals in 1994. 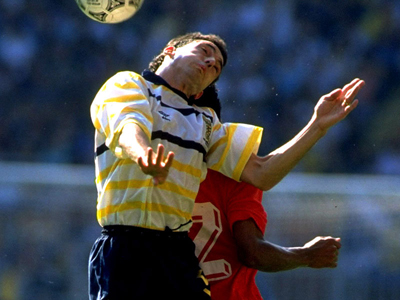 For England, driven by the skills and exuberance of Paul Gascoigne, victory over Cameroon earned them a first semi-final since 1966 but their luck ran out against old rivals West Germany in a captivating contest settled by penalties - and still remembered for Gascoigne's tears. That proved the Germans' toughest test en route to the trophy. Spearheaded by the Inter Milan trio of captain Lothar Matthaus, Jurgen Klinsmann and Andreas Brehme, West Germany had enjoyed 'home advantage' at the San Siro in their first five fixtures, including an impressive 4-1 success against Yugoslavia and a second-round defeat of a disappointing Dutch side.

Toto the unlikely hero
As Italy found to their cost, however, home advantage only takes you so far. Their ride to the semi-finals included a Roberto Baggio wonder goal against Czechoslovakia and a FIFA World Cup record for goalkeeper Walter Zenga, who in keeping five clean sheets went 517 minutes unbeaten. However, their unlikely hero was the wild-eyed Schillaci, capped only once before the finals but scorer of six goals to earn himself the adidas Golden Shoe. Unfortunately for Azeglio Vicini's side, their dreams of a home triumph died at Argentina's hands in Naples.

This was not the Argentina of 1986 but Diego Maradona was still there, his presence dividing the Naples public who worshipped him for his heroics for local favourites Napoli, that season's Serie A champions. Further inspiration came from fellow attacker Claudio Caniggia, scorer of a fine second-round winner against Brazil, and also goalkeeper Sergio Goycochea. A replacement for Nery Pumpido, who broke his leg in the second match, he had made vital saves against Brazil and again in the penalty shoot-out against a strong Yugoslavia side in the quarter-finals. Against Italy he did it once more, his two penalty saves sending Argentina to the Final after a 1-1 draw.

Goycochea could not repeat those heroics in Rome, though, and was beaten by Brehme's 85th-minute penalty that decided a poor Final. Argentina, missing the suspended Canigga, became the first finalists not to score and also the first to have a player sent off when Gustavo Dezotti was dismissed. By the end another Argentinian had seen red, Pedro Monzon, but the better team had won. Sixteen years after captaining West Germany to the FIFA World Cup, coach Beckenbauer had done it again. And in winning their third title, Germany now joined Italy and Brazil as the football world's most successful nations.