Balotelli refuses to be scapegoat for Italy exit 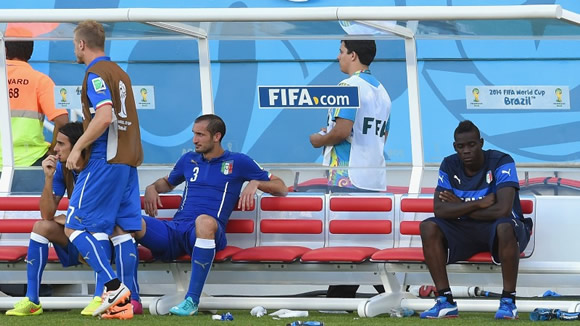 Mario Balotelli is refusing to be the scapegoat for Italy's World Cup failure in Brazil and lashed out at fans that questioned his commitment.

The Azzurri, champions in 2006, were sent packing from the competition for the second time in a row in the group stage after a 1-0 defeat to Uruguay.

Balotelli started against the Uruguayans but was substituted at half-time by coach Cesare Prandelli.

The AC Milan striker, using his Instagram account, said: "I am Mario Balotelli, I'm 23 and I haven't chosen to be Italian.

"I've really wanted to be because I was born in Italy and I've always lived in Italy.

"I was really looking forward to this World Cup and I'm saddened, angry and disappointed with myself.

"Perhaps I could have scored against Costa Rica, yes you (the fans) were right but then? What's the problem then?"

Balotelli scored the winning goal for Italy in their tournament-opening 2-1 triumph over England but the Azzurri suffered 1-0 defeats to Costa Rica and Uruguay.

"The fault," the striker continued, "I'm not going to bring it down on me just this time because Mario Balotelli has given everything to the national team and has not made a mistake (from a character standpoint).

"So find another excuse somewhere else because Mario Balotelli has a clear conscience and is ready to move on stronger than ever.

"I am proud to have given everything for my country."

Balotelli has on numerous occasions in his career been the target of racist taunts.

The 23-year-old referred to his African heritage in his message.

"Perhaps, as some of you say, I'm not really Italian," he said. "The Africans wouldn't have blamed one of their brothers. Never. In this, we black, as you call us, we are light years ahead of you.

"Disgrace is not one that misses a goal or runs less or more. Disgraceful are these things (unfair criticism)."

"I often hear said that there is a need for change, that Buffon, (Andrea) Pirlo, De Rossi, (Giorgio) Chiellini and (Andrea) Barzagli are old," Buffon said to www.figc.it. "The truth is that when you have to push the wagon, this group is the first to do so.

"On the pitch, you have to work and it's not enough to have the 'he could' or 'he might do'.

"On the pitch you see who's there and who's not."

"Not because I am among the four veterans that Buffon has 'saved'," the Roma experienced midfielder said. "But because it's true that we express the right spirit and that we are always the first to show our faces.

"Those who don't feel like putting the same effort, that don't have the same passion should stay at home.

"We have to remember what has happened here and start over as true men.

"Not with figurines or personalities, these are not needed in the national team."

The president of the Italian Olympic Committee, Giovanni Malago, admitted that Italy had fallen well short of expectations.

"From a sporting and football standpoint it has been a failure," he said to Gazzetta dello Sport. "I'm disappointed by many things, especially the little quality in our game.

"The games just speak for themselves.

"Buffon's testimony regarding the players' responsibility as well as as the fact that Italy deserved to be eliminated has been very honest.

"Balotelli has not been the only one to (make us) lose but he certainly has been disappointing."

"Abete's decision is a meditated one," Malago said. "He said he would have resigned anyway and I believe in his honesty.

"To assume responsibility should always be a logical consequence, not only in football."
Another significant change ahead of Italy's European Championship qualifying campaign will be the coach.

Prandelli resigned as Italy's boss after the game having signed a two-year contract extension before the World Cup.

Roberto Mancini, who recently stepped down as coach of Galatasaray and former AC Milan tactician Massimiliano Allegri have both been linked by the Italian media as candidates to replace Prandelli.