BITE victim Giorgio Chiellini says FIFA have been too tough on Luis Suarez.

SYMPATHY: Italy midfielder Giorgio Chiellini has insisted he feels for Luis Suarez and his family in the wake of the biting incident

Chiellini spoke up for his attacker the day after the Liverpool striker was banned from all football-related activity for four months, suspended for nine competitive internationals and fined £65,000.

And his intervention could help Suarez when FIFA hear his appeal against the ban.

The Italy and Juventus defender said: “I have always considered unequivocal the disciplinary interventions by the competent bodies, but at the same time I believe that the proposed formula is excessive.

"Now inside me there’s no feelings of joy, revenge or anger against Suarez for an incident that happened on the pitch and that’s done.

"There only remains the anger and the disappointment about the match.

"At the moment my only thought is for Luis and his family, because they will face a very difficult period.”

Chiellini now looks set to speak up for Suarez - who bit him on the shoulder during Uruguay’s 1-0 defeat of Italy on Tuesday - at an appeal.

England’s Wayne Rooney saw his three-match ban for kicking out at Montenegro’s Miodrag Dzudovic reduced to two by UEFA in 2011 after the defender submitted evidence to say he felt the punishment was too harsh. 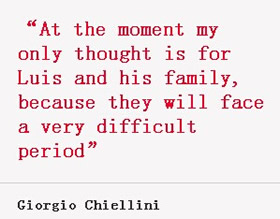 "I used to believe that spitting at another opponent was the worst thing you can do, but biting someone goes beyond,” he said.

"You can think that something is definitely the worst, and then you discover there’s always something worse. I think it’s the right sanction for him.”

And FIFA yesterday did not look in the mood to show any leniency.

"They are decisions which are made by the disciplinary committee based on what they have seen.

"It’s not just about the incident -- it was seen by hundreds of millions of people.”

Asked if Suarez’s club Liverpool were being unfairly punished by the sanction, he replied: “It’s not Liverpool punished, it’s the player being punished.”

Meanwhile Uruguay FA president Wilmar Valdez has confirmed the association will appeal against the ban.

He said: “We are preparing our appeal now, we have three days to do it.

"It is an excessive decision and there was not enough evidence and I have seen more aggressive incidents recently.

"It is a severe punishment. I don’t know exactly which arguments they used but it is a tough punishment for Suarez.

"It feels like Uruguay has been thrown out of the World Cup. We all know what Suarez means to Uruguay and to football around the world - not having Suarez wouldbe a loss to any team.”

Any appeal will not allow Suarez to play against Colombia in the last 16 in Rio today.

He has flown to Montevideo with Real Madrid and Barcelona mulling over making cut-price offers, with the pair now valuing Suarez at around £25m.