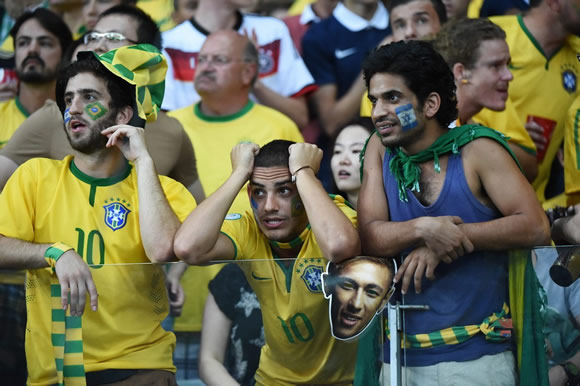 The tears started flowing before half time, and by the end of a 7-1 shellacking in the World Cup semifinal, millions across Brazil were in dazed, damp-eyed disbelief.

The national team wasn't just defeated by a powerful German team. It was routed in front of the entire world, humiliated at its own party. Young and old, Brazilians shared in the anguish of what many called a national calamity — the worst loss in their team's storied World Cup history.

A rain of seven goals by the powerful German team devastated the Brazilian soccer faithful across this continent-sized, soccer-mad country that for years has harbored hopes of winning its sixth Cup title right on its own turf.

"I couldn't believe my eyes! It was like the game was on replay," said Valeria Mazure, a 67-year-old retired teacher drinking beer in Rio, and sporting Brazil's colors in a green tunic and yellow scarf. "I'm feeling disappointed, sad, but more than anything I'm feeling embarrassed. It was embarrassing to watch."

So much so, some of the fans who were in the stadium where the massacre played out in excruciating fashion simply exited at halftime, some tearing up there tickets and giving the thumbs down to TV cameras.

"Five to zero is so embarrassing, we're not going to stay any longer," Ribeiro said Franca as he left the stadium in Belo Horizonte at halftime, with Germany on top 5-0. "One to nothing is fine, one-one, two-one, two-two, but five to nothing is shameful for a country that has a tradition of soccer."

While tears flowed freely, the mood for many was shifting to anger, disbelief and a search for comedy relief.

"By the 30th minute of the first half my Facebook feed was absolutely full of jokes poking fun at the team," said Mirel Ribeiro, a 25-year-old fan in Rio. "This was such a slaughter we can't even cry about it."

"Watching the Brazil team play in earlier matches, I thought there was a possibility that Brazil could lose — but I never imagined it could lose so terribly," said Ricardo Azevedo, a fan in Rio. "I feel an immense sadness, but not only that, I feel annoyed at the blackout that happened on the pitch. We just blacked out."

With Brazil's star striker, Neymar, out injured and captain Thiago Silva suspended for the match, it quickly became clear the Brazilians couldn't handle the Germans.

With Brazil tossed out of its own World Cup in such rough fashion, "you are going to have the most depressed country ever," fan Pablo Ramoz said.

Brazil spent billions of dollars preparing for the tournament, with expectations that home advantage could deliver Brazil a sixth title, but the high cost also ignited intense anger and protests against the World Cup, with demonstrators lamenting the costs when the nation is saddled with woeful public services.

Few thought Germany's stomping of Brazil would spark renewed mass protests — but it is certain to put a severely sour taste back into the mouths of the nation's fans. Many were already strongly questioning whether it was worth it to hold the event, a bad omen for President Dilma Rousseff, who faces an October election.

"I hope this can make people wake up and start thinking with their heads and not their emotions and that people translate the anger they are feeling at the ballot boxes," said Antonio Hipolito, a bookstore worker in a wealthy part of Rio who lives in a distant, hardscrabble neighborhood. "Soccer is just an illusion and we need to wake up to reality."

In Sao Paulo, Brazil's biggest city, thousands gathered to watch the match in the Bohemian neighborhood of Vila Madalena, the streets carpeted with yellow, green and blue — the colors of the Brazilian flag.

Samir Kelvin clung to a street pole and loudly cried: "I have nothing left! I am Brazilian and humiliated I want to kill myself!"

A woman shouted "What shame, what shame!" as a man nearby banged his head against a bar table.

Back in Rio, a large group of fans had gathered at a 600-unit apartment complex in the Barra neighborhood.

Jorge Cardoso, an engineer, blamed the loss on the injury that sidelined Neymar and the benching of Silva for accumulating two yellow cards during the tournament.

He said simply: "It's like someone you love has died."