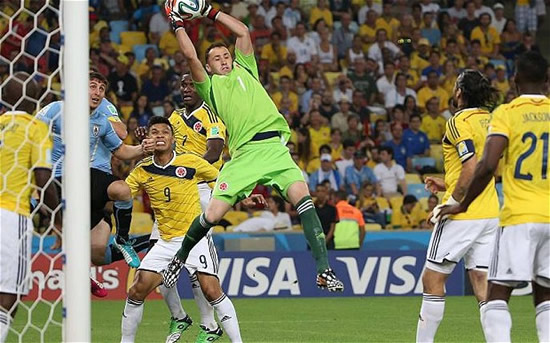 High flier: Colombia goalkeeper David Ospina performed well at the World Cup where he kept two clean sheets as his team progressed to the quarter-final stage

Arsenal are preparing a bid for the Colombia goalkeeper David Ospina after Cardiff City priced David Marshall out of a move back to the Premier League.

Arsène Wenger needs to add another goalkeeper this summer following the departure of Lukasz Fabianski, who turned down the offer of a new contract, and is now interested in Ospina. There was an initial inquiry for Marshall but, with Cardiff wanting £10 million, Wenger felt that he could get better value elsewhere.

Ospina has impressed for Colombia during the World Cup and it is thought that he would be available from Nice for as little as £3 million.

The signing of another senior international goalkeeper will also clearly put pressure on the place of Wojciech Szczesny, Arsenal’s current No 1, who has endured some wobbles since establishing himself ahead of Fabianski. He was dropped at the end of the 2012-13 season and Wenger also opted to keep Fabianski in goal for the FA Cup final rather than recall Szczesny.

Arsenal also expect to confirm the signings this week of two new right-backs, Newcastle United’s Mathieu Debuchy and Atlético Madrid’s Javi Manquillo. Their arrivals will mean loaning out Carl Jenkinson so that he can experience regular first-team football.

Having completed the £30 million signing last week of Alexis Sánchez from Barcelona, Wenger is also hoping to enhance his central midfield options. There is interest in Germany internationals Lars Bender and Sami Khedira, although it remains uncertain whether their respective clubs, Bayer Leverkusen and Real Madrid, would allow either player to leave.

Arsenal had a £19 million bid for Bender turned down last summer and, while Khedira is now in the final year of his contract, there is an expectation that Madrid will offer him an improved deal.

Arsenal must also decide the future of Mikel Arteta, who also has one year left on his contract, while Wenger does still have the alternative central midfield options of Aaron Ramsey, Jack Wilshere, Abou Diaby, Mathieu Flamini and Alex Oxlade-Chamberlain.
There are varying question-marks, however, about the fitness and likely availability of Wilshere, Diaby and Oxlade-Chamberlain following recent injuries.