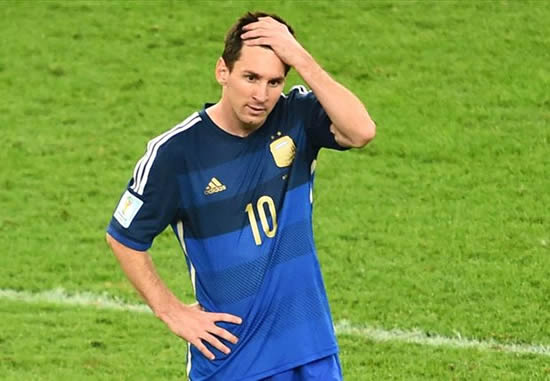 The 27-year-old was frustrated by his side's inability to finish their chances, while also pointing to the fact they had a day less to recover for the final

Lionel Messi blamed Argentina's 1-0 World Cup final defeat to Germany on their forwards for being wasteful in front of goal.

The 27-year-old was a peripheral figure on the night and fired wide a golden opportunity to give his side the lead in the second half after Gonzalo Higuain had done the same in the opening period, while Rodrigo Palacio also scuppered a great chance.

Argentina were then punished for their failure to convert those chances when Mario Gotze scored a brilliant winner in extra-time to take the World Cup back to Germany.

And Messi believes his side deserved better, insisting they should have taken their chances.

"We haven't been in the semi-finals for many years and the fact that we played the final and the way we played it it's something to be proud of,"Messi said after the game.

"But we deserved more and that's why we are sad. The strikers missed the chances we had. It's a bad feeling for all of us because we couldn't win the cup and take it to our people.

"It's painful to lose it by so little. We were very close of a big change for this national team but we couldn't finish it."

Argentina made it to the final after beating Netherlands on penalties in their semi-final on Wednesday, a day after Germany thrashed Brazil 7-1 in their last four clash.

And Messi felt the ease at which Joachim Low's side cruised to victory last week, along with the additional 24 hours of rest ahead of the final, was key as the final went into extra-time.

"I was OK physically as were the rest of us," he added.

"The fact that we played a day after them and that we played extra-time against a team that was able to rest in the last minutes of their semi-finals affected our finish of the game.

"A difference of one day is big at this stage."

Messi could take one small crumb of comfort from his evening after being awarded the Golden Ball as the best player of the tournament, though he said the prize "meant very little" on a disappointing night.