Owen: We expected too much from Messi 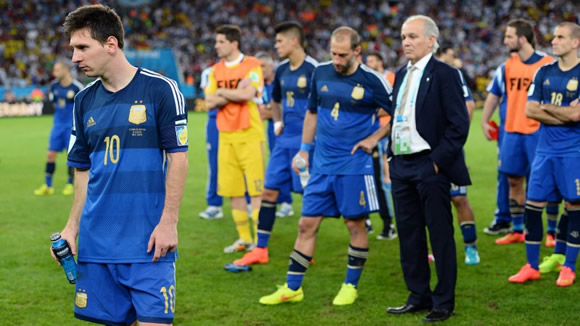 The Barcelona forward scored four goals, and created another, as Argentina finished as runners-up to Germany.

He won the Golden Ball award for the best player in Brazil but former national team great Diego Maradona and FIFA president Sepp Blatter are among those questioning whether he truly merited the prize.

Owen believes others performed better, but the sense of disappointment at Messi's performances stems from heightened expectations following his incredible success at the Nou Camp.

"With Messi we expect so much from him. If no-one had heard of him and was watching for the first time, they'd have been wondering who this great number 10 for Argentina is - he scored a few goals, some important ones, and can beat players, can create and score.

"People would be saying this is a world-class player we were watching. But, because we know him, and expect so much, wanted him to really light it up like Diego Maradona did in the past on the way to winning the World Cup.

"Because he didn't play at the absolute top of his game people are a bit disappointed, but he still had a very good tournament."

As for England's poor showing at the World Cup, Owen believes the country's young players are as good as any in the world, but the national game's structure makes it hard to break into a Premier League team.

"The game has changed an awful lot since I was growing up and the players that Manchester United famously developed like David Beckham, Ryan Giggs, Paul Scholes, Nicky Butt and the Nevilles. At Liverpool there was myself, Steven Gerrard, Robbie Fowler, Jamie Carragher and Steve McManaman," Owen said.

"We had a great structure throughout our academies and into reserve team football, but now they have done away with reserves.

"So you're going straight from glorified academy games to trying to get Yaya Toure, Sergio Aguero or Luis Suarez out of the team and it's basically impossible.

"We've got good players in our youth teams, England won the U17 European Championship so we have got the players, but only until about 17/18 then there is a huge wastage of talent because they all get snarled up in the system."

Looking towards Liverpool's hopes, Owen believes his former club need to apply themselves to make a big step up.

The Reds finished second behind champions Manchester City last season after a spell at the top of the table.

"One or two signings and it could be a good season for Liverpool.

"Steven (Gerrard) had a fantastic season last season and if he can play anywhere near what he played last year, he's going to give a lot of people a lot of pleasure for another season. Hopefully he can go on.

"He has obviously redefined his game a little bit, which everyone has to do at some point in their career. He was brilliant last year; I remember him having some outstanding games throughout the season.

"Raheem Sterling had a good season last year. He's young and hopefully he can go on, that confidence can snowball and he can become a top player for years to come."