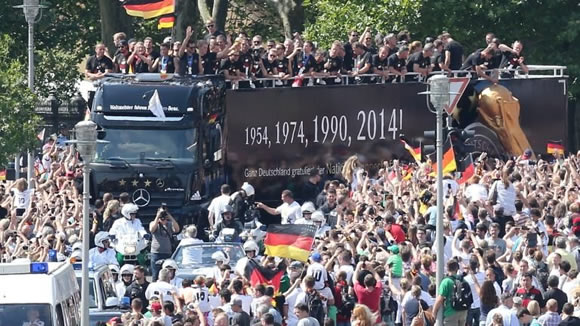 Thousands of fans greeted the Germany players in Berlin after their World Cup-winning exploits in Brazil.

Fresh from their last-gasp victory over Argentina on Sunday inside the Maracana, coach Joachim Low and his stars landed in the German capital at 9.15am on a flight delayed by 90 minutes.

Bayern Munich midfielder Philipp Lahm was the first to step off the plane and was followed by club and German team-mate Bastian Schweinsteiger with a huge crowd singing "Football's Coming Home" on the airport's viewing terrace.

Arsenal midfielder Mesut Ozil was quick to comment on social media with a tweet saying: "Back in the country of the world champions"

Forward Lukas Podolski posted a selfie with Schweinsteiger and the trophy. He tweeted: "The Cup is in Berlin!!!"

Mario Goetze, who scored the winner in the final, tweeted: "Wow, what's going on here ... AMAZING!"

There were chaotic and jubilant scenes in Berlin city centre with thousands lining the streets to witness the players on top of the team bus unveiling the famous trophy as the parade made its way to the iconic Brandenburg Gate.

"This time, thank God, we have the cup with us," Schweinsteiger told ARD television. "It will only sink in for us in the next few days."

It has been an incredible few weeks for the Germany team, who began the World Cup by sweeping Portugal aside 4-0 before demolishing the Brazilian hosts 7-1 in the semi-finals which has led to the downfall of coach Luiz Felipe Scolari.

The final was more of a battle against a stubborn Argentina side including Lionel Messi and it looked all set for a penalty shoot-out, only for Mario Gotze to volley in a stunning winner in extra-time as Low became the first man to lead a European team to World Cup glory in South America.

But Schweinsteiger is targeting further glory with Germany as he looks ahead to Euro 2016.

With a young squad in place, he feels there is plenty of potential there for Germany to go on and win many trophies in the near future.

"This will give us hunger now, absolutely," the midfielder said.

"We want to do it again at the next tournament. The important thing is that the young guys have the experience of this tournament and we will go to France (for Euro 2016) and try and do it again for sure.

"It won't be easy because we have a young team. But we have some players like Philipp Lahm, Mesut Ozil and Per Mertesacker who have the experience. This mix makes a big difference."