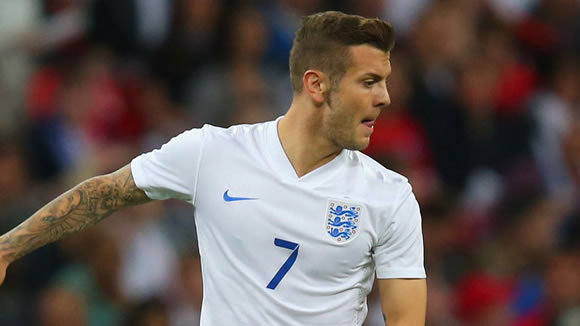 After England touched down on home soil on Wednesday following their World Cup exit, the Arsenal midfielder admitted to being devastated at not making it through the group stage.

There were a few glimpses of positivity from the likes of Ross Barkley, Luke Shaw and Wilshere himself in the 0-0 draw against Costa Rica, but that mattered little to the Arsenal midfielder, who said he was "devastated" to exit the competition at the first hurdle.

"It's easy for me to stand here and say: 'we're young, we can go forward.' But if you look at Germany, they've got young players who are delivering now," Wilshere said.

"Time is running out for us to say we're young anymore. I'm 22, Ross and Luke (Shaw) and Raheem (Sterling) are young players.

"They showed in this tournament what they can do. But in the next tournament, we really have to deliver.

"It is a nice group of young players and hopefully we can stick together, learn from this tournament, take all this disappointment and bottle it up. This is the worst feeling. I'm devastated."

Roy Hodgson has been criticised for selecting such a youthful squad, and for his tactics, but Wilshere said the players are to blame for the early exit, not the England manager.

"It is not the manager's fault," he said. "The manager can pick the team but the players have to go on the pitch and do it.

"Everyone here respects the manager. He has got a fantastic CV and been to World Cups before. If anything comes out of this, it is that this manager is the one to take us forward."

Defender Phil Jones also backed Hodgson, saying: "Roy, the boss, has been terrific. "Every training session he has put on the lads have responded to it. We can't thank him enough.

"It's us players who go out on the pitch and ultimately do the business and we have fallen short of that."

Wilshere also pledged to start his pre-season training early as he wants to be at peak fitness by the time the Premier League kicks off on August 16.

"I think I will go back early," he said. "My fitness is on the way up and I don't want to lose that.

"I'm going to have maybe a couple of weeks off. But I don't want to lose my fitness. I'm going to carry on training, do my bit, because I only played two games in the last three or four months."