'Suarez has been made a scapegoat' - Tabarez lashes out over ban 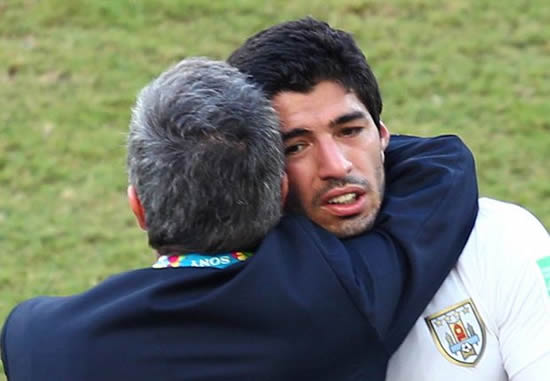 Uruguay coach Oscar Tabarez has slammed Fifa for making Luis Suarez a "scapegoat" and has blamed the British media for creating the storm that led to an "excessive" four-month ban for the striker.

Suarez was banned from all football for four months, in addition to a nine-match ban for international matches, for biting Italy defender Giorgio Chiellini in Uruguay’s World Cup Group D victory over Italy in Natal on Tuesday.

Ahead of his side’s last 16 match against Colombia at the Maracana on Saturday, Tabarez delivered a lengthy and passionate statement in his pre-match press conference before leaving the room to loud applause from Uruguayan journalists.

"As a coach I think of the theory of the scapegoat,” Tabarez said. “Of giving a punishment as an example, so that everyone gets the message of what is good and bad, correct and not.

"We agree with the basis of it, but there is a danger in proceeding this way. Many times you forget the scapegoat is a person who has rights.

"Before and after the Suarez episode we have seen incidents measured with a completely different barometer.

"That does not mean I am not justifying anything, I believe he should be punished.

"I can’t deny that we were waiting for disciplinary action, but the decision was of an excessive severity. This was a transgression, not a crime.

"It was a decision which is obviously much more focused on the opinions of the media that attacked him immediately at the conclusion of the match and in the press conference afterwards.

"The journalists took only that topic for the press conference. I don’t know what their nationality was but they all spoke English.

"When I speak of media attacks, the topic they concentrated on was the background and history of Luis because of things that happened in the past.”

Suarez’s suspension is the third time he has been banned for biting an opponent during a match, having received a seven-game ban for biting Otman Bakkal while at Ajax in 2010 and a 10-match suspension for doing the same to Branislav Ivanovic in April 2013.

But Tabarez, who resigned from his position on the Fifa strategy committee in protest, backed Suarez with a message of support for the Liverpool striker.

He added: “Besides Luis Suarez’s mistakes, he has made significant contributions to football on the pitch. This is the true power of wonderful World Cups – the contribution of great football players.

"To Luis Suarez the person, the person who has always coexisted with us and we know him better than anyone else.

"The path you have covered is one he will go through again as someone who starts again to be better - but you will never be alone in that attempt.

"To the Uruguayan fans. We know you are moved by the punishment. We want you to know we are hurt but we have the desire to rebel. More than ever before, we will do our utmost for the match tomorrow.”