Arsenal confirm the signing of Alexis Sánchez from Barcelona

Arsenal have confirmed the signing of Alexis Sánchez from Barcelona for a fee of around £30m in a move manager Arsène Wenger will hope gives them a real opportunity of capturing a first Premier League title for more than a decade.

The 25-year-old, who starred for Chile as they reached the last 16 of the World Cup before losing on penalties to hosts Brazil, has signed a long-term contract believed to be for five years, having completed his medical at the club’s London Colney training ground today. 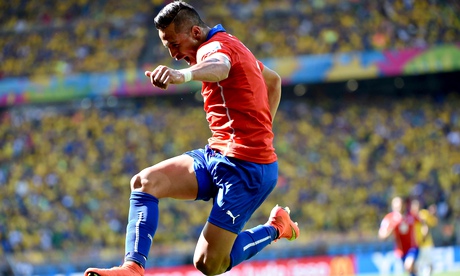 “As many people have seen during the World Cup this summer, Alexis is a fantastic footballer and we are delighted that he is joining us at Arsenal,” read a statement from Wenger, who is still at the World Cup working for French television.

“Alexis will add power, creativity and much quality to our squad and we are all looking forward to him joining up with us in a few weeks. He has consistently produced top-quality performances at the highest level for a number of seasons now and we are all excited to see him integrate into the Arsenal squad. I’m sure all Arsenal supporters will join me in welcoming Alexis to our club.”

The deal for Sánchez had initially appeared to rest on Barcelona’s attempts to buy Luis Suárez from Liverpool, with Italian giants Juventus also believed to be in the frame. However, after it emerged that Arsenal was his preferred choice, the north Londoners acted quickly to seal the deal for a player who scored 39 goals for Barcelona in his three seasons at the club after joining from Udinese.

“I’m so happy to be joining Arsenal, a club which has a great manager, a fantastic squad of players, huge support around the world and a great stadium in London,” said Sánchez.

“I’m looking forward to meeting my new team-mates and to be playing for Arsenal in the Premier League and Champions League. I will give my best to Arsenal and want to make all the supporters happy.”

Sánchez becomes the second most expensive signing in Arsenal’s history after the purchase of Mesut Özil last summer. His arrival is set to be followed by that of Newcastle’s Mathieu Debuchy for £11m, while Wenger is reported to be close to signing the Spain Under-20 international Javier Manquillo on loan as cover to allow Carl Jenkinson to join Newcastle.