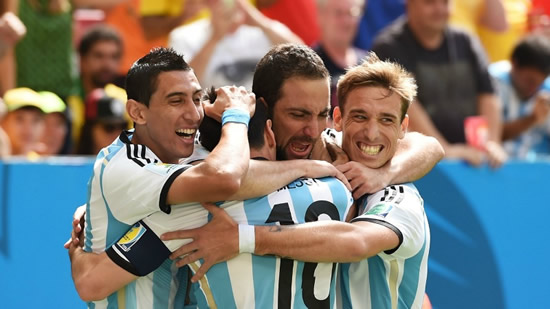 Argentina will lock horns with Germany for the biggest prize in world football on Sunday after they beat Holland on penalties in Sao Paulo on Thursday night.

Alejandro Sabella came under fire before the World Cup for omitting Carlos Tevez from his 23-man squad, and the Argentina coach's reserved manner led some to question whether he had the requisite charisma to manage the side in Brazil.

When Argentina arrived at the World Cup, Sabella was criticised for being too reliant on Lionel Messi.

But with Argentina now one step away from World Cup glory, the coach and his charges can revel in silencing their doubters.

"A lot of people didn't think Argentina would get to the final but we knew what players we had - very good players," Manchester City striker Aguero said.

"Making the final means so much."

Aguero scored the third penalty in the shootout, which came after a scoreless 120 minutes.

Louis van Gaal snuffed out the threat of Lionel Messi by packing the midfield and, at the other end, Ezequiel Garay, Martin Demichelis and Javier Mascherano kept Robin van Persie and Arjen Robben quiet.

Coming 24 hours after Germany put five past Brazil within half an hour, the cautious play from both teams was understandable.

Mascherano expects a similar kind of game in the Maracana on Sunday as he is wary of the Germans' attacking prowess after their stunning performance in Belo Horizonte.

"On Wednesday we played like we did against Belgium - we didn't give them any options," the Barcelona midfielder said.

"Now we will study Germany. Obviously we can't afford to give them the space that Brazil did."

"It will be a final we must play with patience and calm, with hunger and heart."

Argentina's hero of the night was goalkeeper Sergio Romero who saved penalties from Ron Vlaar and Wesley Sneijder in the shootout.

Sabella took some more flak before the tournament for choosing Romero as his number one.

Romero was shipped out on loan to Monaco at the start of the season from Sampdoria, but he could not dislodge first choice stopper Danijel Subasic.

Sabella stuck by the goalkeeper though and the 27-year-old is thankful he did so.

"He helped me throughout what was the most difficult time of my career," Romero said.

"It was the first year that I had spent sitting on the bench. So I had to thank Alejandro for everything he did for me over the year."

Romero never doubted his own abilities during his year out of the team.

"I never let the criticism I had get me down," he added.

"On the contrary, it made me work harder."

Romero had another coach to thank on Wednesday night - Louis van Gaal.

The Holland coach brought Romero to AZ Alkmaar from Argentina in 2007.

"I went to the dressing room to thank Van Gaal," the 27-year-old added."

"He is someone who helped me a lot when I arrived in Holland."

"So just as I am grateful to Alejandro Sabella, I am also grateful to Van Gaal for everything he did for me."

Romero was just three years old the last time that Argentina made the World Cup final.

On that night in Italy, West Germany beat the Argentinians with a controversial 85th minute penalty.

For this encounter Sabella has a near full squad to choose from.

Angel Di Maria is the Argentinians' only injury doubt.

The winger had to watch the agonising penalty win from the sidelines because of a thigh injury, but he has vowed to do everything in his power to return for Sunday's final in the Maracana.

"I will do everything I can to be fit for Sunday," said Di Maria, who scored Argentina's second-round winner against Switzerland."