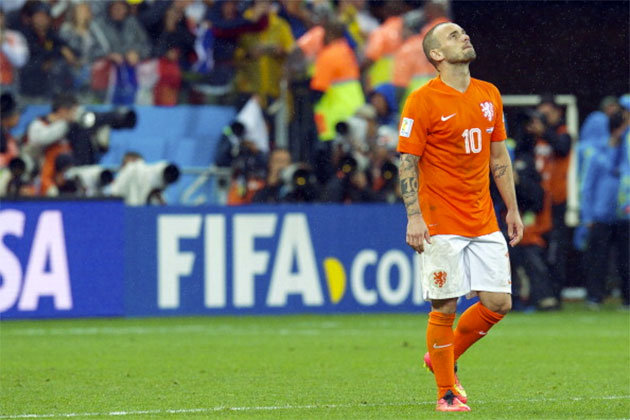 Boffins at Cambridge University Press have compiled a multi-billion word database in order to find the terms most associated with each 2014 World Cup football team.

By scouring a broad range of English-language media sources throughout the tournament, the study has produced a list of the top three words used in conjunction with each team in Brazil. Here's the full list, as per the BBC:

While some terms are quite unsurprising (Belgium "dark horse"; Honduras "physical"; Cameroon "hapless"; Spain "humiliation") there are plenty that don't seem to quite fit. The top word for England, for example, is "exciting." That really couldn't be any further from reality. And Portugal's second most popular word is "ego", but that appears to have been accidentally inserted in place of the word "Ronaldo."

The USA's terms are typically patriotic ("determined, heroic, courageous") and Uruguay's are at least 66% dictated by the actions of Luis Suarez ("bite, disgrace, doe-or-die").

Brazil's top word, meanwhile, is "emotional," which seems highly appropriate for a team who burst into tears roughly every five minutes and who held up a Neymar shirt before their semi-final slaughtering at the hands of Germany as if their injured star player had passed away.

Russia's words are perhaps the most damning ("drab, error, mediocre") and they seem to explain why the World Cup's best-paid manager is being forced to explain himself to Russian parliament.