The faces of the three supporters were, like so many others, adorned with face paint in the colours of the team they were supporting; Germany. In white football shirts they stood, preparing to watch the incredible semi-final between Brazil and Joachim Low’s men. 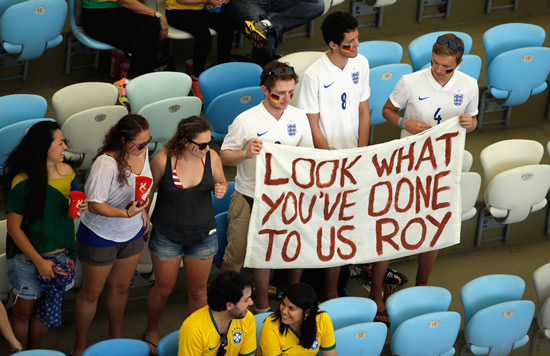 Closer inspection revealed an anomaly. The replica shirts worn by the three fans weren’t those of Germany but were nonetheless familiar, although they hadn’t been visible at this World Cup for some time. The trio were sporting the Three Lions of England, each of them clinging to a hand-drawn banner that read: “Look what you’ve done to us Roy!”

England’s continued failure at major tournaments has, if nothing else, numbed the pain of defeat. While the nature of this latest below-par showing may have surprised a few, for most, a shrug of the shoulders and a shake of the head was all it warranted before we settled down to watch the rest of the world show us how it should and could be done.

The harsh reality is, as England supporters we’ve had to learn to love watching other nations play. That of course is no bad thing – a true football fan can appreciate good football whoever plays it, even when it’s a long standing rival though there are, of course, limits. You won’t find a Scotsman roaring England on to victory in a hurry, and as a Watford supporter I’m hardly jumping for joy when that lot from up the M1 miraculously avoid defeat. Those boundaries are becoming increasingly blurred, though, and as England’s form has continued to dip, so has their right to maintain meaningful rivalries.

My first memory of the heartache International football could inflict was the 1986 defeat to a Maradona-inspired Argentina, but after that I spent my formative years feeling constantly bullied by the German national team. Their players were arrogant, aloof, confident and, above all else, very, very good. England played them several times in major tournaments and ran them close, but could never quite finish them off. As an England supporter I wanted to beat Germany more than anyone else.

Then came Munich, 2001. England stunned the footballing world by humiliating Germany 5-1 away from home in a World Cup qualifier. I can’t name a single person I know that didn’t have an image of the scoreboard as their desktop wallpaper for months afterwards. It was incredible. The moment I’d waited for had arrived. We were finally on top in our battle with Germany. It felt magnificent.

Not for long, though – because as usual, they had the last laugh. Germany pipped us to top spot in the qualifying group and went on to reach the World Cup final. Since that famous night in Munich, the gulf between England and Germany has grown so cavernous that I’ve had no option but to abandon my long-held desire to be better than them. We’re not, and as far as I can tell, never will be. Now that may sound depressing, but in actuality, it’s opened up a whole new world for me.

It’s allowed me to appreciate Germany for what they actually are, which is, of course, a monstrously good footballing nation.

The banner those England supporters held in Belo Horizonte was amusing but, in truth, most England fans have admired Germany for some time now. The unspectacular yet alarmingly prolific Miroslav Klose is now the leading scorer at World Cup finals, and he seems to be the embodiment of the team he represents. Always there, always prepared, always ready to strike at the right time.

Once again they have, as always, acquitted themselves hugely impressively at a tournament that was in danger of being completely dominated by teams from South America. For Germany and their players, their presence in the final was probably never in doubt and here they stand, poised to make history as the first European team to win a World Cup on South American soil.

Whilst I hope that one day England will once again prove themselves to be a worthy adversary, for now I and my fellow Englishmen have no option but to join with the rest of the world in admiring the undeniable quality that our once bitter rivals, as always, continue to display.