Barcelona prides itself in upholding high moral values and being ''more than a club.'' The Catalan giants, though, have decided to overlook a litany of misdemeanors by Luis Suarez to sign football's most high-profile outcast. 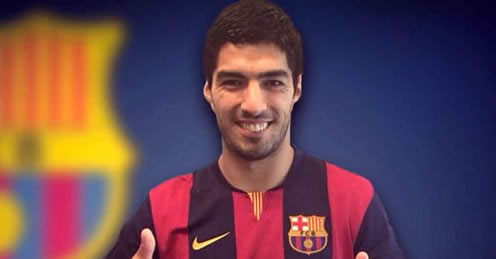 The Uruguay striker is set to seal his transfer from Liverpool next week despite being unable to play, or even train with his new teammates, until the end of October when his latest biting ban expires.

FIFA on Thursday rejected Suarez's appeal against the four-month suspension from all football activity for sinking his teeth into an Italian opponent during a World Cup match last month.

But Barcelona was undeterred in striking a transfer deal on Friday of around $130 million with Liverpool to bolster its strike force as it tries to regain the Spanish title. Suarez will travel to Barcelona next week for a medical examination and to sign a five-year contract.

The ban will prevent Barca holding an official presentation in the Camp Nou. Friday's announcement by the club made no mention of Suarez's punishment for biting Giorgio Chiellini, while hailing the scorer as a ''strong competitive spirit and a powerful figure.''

For 27-year-old Suarez, the move to Spain provides an escape route and a chance to rehabilitate his image in a new environment. Despite scoring 82 goals in 133 Liverpool appearances, Suarez's prowess in front of goal during three years in England was overshadowed by bans for racial abuse and biting.

''It is with a heavy heart that I leave Liverpool for a new life and new challenges in Spain,'' Suarez said Friday. ''Me and my family have fallen in love with this club and with the city. We will always be Liverpool supporters. This club did all they could to get me to stay, but playing and living in Spain, where my wife's family live, is a lifelong dream and ambition. I believe now the timing is right.''

The World Cup incident followed a club season that had begun with Suarez also being banned for biting, after he bit Chelsea defender Branislav Ivanovic during a Premier League match in April 2013. Barcelona will be hoping Suarez brings his scoring form to Spain - he netted 31 in the Premier League last season as Liverpool finished second - rather than the hot-headed temperament.

When Suarez is eventually eligible to play again, Barcelona will be able to deploy a formidable front line including Lionel Messi and Neymar, as the club rebuilds under new coach Luis Enrique after its first season without a major trophy in six years.

''It is with great reluctance and following lengthy discussions we have eventually agreed to his wishes to move to Spain for new experiences and challenges,'' Liverpool manager Brendan Rodgers said.

Having extracted from Barca almost double the 40 million pounds ($68 million) Arsenal valued Suarez at last year, Liverpool has funds to reinvest in the squad. American owner John Henry has already spent around $70 million on striker Rickie Lambert, and midfielders Adam Lallana and Emre Can.

Just how reliant Liverpool was on Suarez will become quickly apparent. It was only with Suarez's goals that Liverpool mounted an unexpected but ultimately unsuccessful challenge for the Premier League title last season.

''If there is one thing the history of this great club teaches us, it is that Liverpool FC is bigger than any individual,'' Rodgers said.