Thomas Muller has warned Germany fans to expect a tight and nerve-wracking World Cup final against Argentina on Sunday. 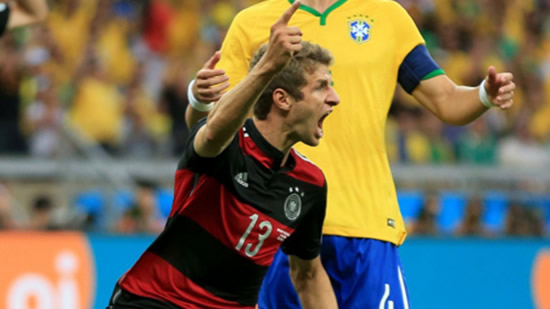 The Bayern Munich star has scored five goals to help the Germans to the final, including one in the 7-1 demolition of Brazil in the semi-final.

Muller says the team is not reading anything into Tuesday night's extraordinary match and is expecting a completely different game at the Maracana.

"I don't know what kind of a game it will be on Sunday, but I don't expect it to be 5-0 at half-time," he said. "That would be nice, but it's probably going to be tight like it was against Algeria or France."

Germany led Brazil 5-0 at half-time in Belo Horizonte. Defender Mats Hummels was quoted in the Daily Mail as saying the players had agreed during the interval not to go out and embarrass Brazil in the second half, and Muller confirmed such a decision was made.

"It was about not trying to humiliate our opponents or showboating," he said. "We wanted to carry on playing normal football and not get arrogant, but that's quite normal - it was the players' initiative."

As a result, Muller says Germany were able to "concentrate on preserving energy and avoiding injuries" in the second half.

Captain Philipp Lahm says experience could be pivotal in Sunday’s showdown and believes it gives the Germans the edge.

"Experience is important," he said. "I think if you look at club level, many of us have already been involved in big games. Whether they were positive or negative is not important, but we all have experience in a Champions League final, DFB-Pokal final, or whatever.

"We're always playing at the very top level and when you go through our squad, you'll see we've all got that experience and it's certainly an advantage for us."

And the Bayern Munich defender is confident he will be lifting his ninth trophy since August 2012 on Sunday.

If Germany triumph in Rio, they will return home for a reception in Berlin on Tuesday, along the so-called fan mile linking the Brandenburg Gate and the Siegessaule.

"In the past, we'd been faced with the question of how we would celebrate with our fans. After the 2006 World Cup, we did that after finishing third. In 2008, after coming second at the European Championships.

"This time, we've decided only to celebrate together with our fans if we win the title, and we are absolutely adamant that we will do it."