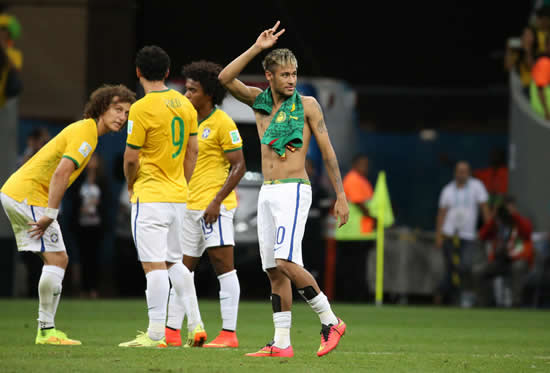 If there's one thing that the governing body cares above all else, it's the protection of its high-paying sponsors' exclusivity. After all, you don't become a non-profit organization with a rainy day fund of $1.4 billion in cash by being concerned with players biting each other. You do it by making sure players don't have underpants made by non-FIFA sponsors peeking out of their shorts.

According to UOL, the underwear alarm went off at FIFA headquarters when Neymar's were partially exposed after he swapped shirts following Brazil's 4-1 win over Cameroon. And if you think that this is all a big joke, consider that Denmark's Nicklas Bendtner was fined €100,000 ($125,797) by UEFA (European football's governing body) when he celebrated a goal by lifting up his shirt to reveal the name of a betting firm on the waistband of his underpants at Euro 2012. For the sake of comparison, the Croatian federation was fined less for its fans' combination of racial abuse aimed at opposing players and flare throwing at the same tournament.

This also isn't the first time Neymar's underwear has raised concerns from the football brand police. When a similar situation occurred while he played in a Champions League match for Barcelona two months ago, his press agent had to deny that it was an intentional marketing strategy.

So remember: You can never say that FIFA doesn't care. Because it does care very much about underwear. And money.