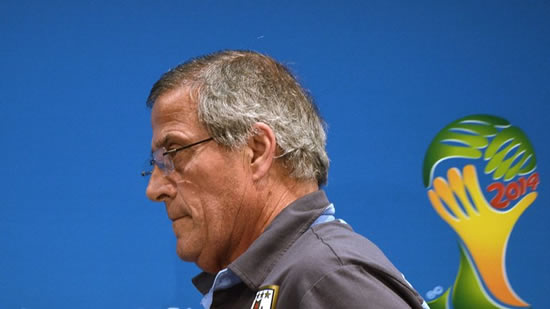 Oscar Tabarez: Blasted FIFA during a press conference at the Maracana on Friday.

Uruguay boss Oscar Tabarez has accused FIFA of making Luis Suarez a "scapegoat" and resigned from his role within football's governing body in protest over the striker's punishment.

Suarez was banned on Thursday for nine international matches and suspended from any involvement in football for four months after biting an opponent in Uruguay's 1-0 World Cup Group D win over Italy.

The Liverpool striker flew back home to Montevideo in disgrace after his FIFA accreditation was withdrawn, prohibited from remaining with his team-mates in Brazil.

But on the eve of Uruguay's last-16 clash with Colombia, Tabarez insisted Suarez was the victim of a witch-hunt and said his position on FIFA's Technical Study Group - an expert panel which analyses international matches - was now untenable.

"It is not wise or prudent to be in an organisation with people, those who exerted pressure to promote this decision and those who rendered the punishment, who managed procedures and values very different to those I have," Tabarez told reporters at his pre-match press conference.

"Therefore, in the coming days, I will file my resignation to that position formally."

Tabarez refused to take questions on Suarez, instead reading a lengthy statement in which he blasted the forward's ban as "excessively severe," accused FIFA of pandering to English-speaking media and pledged unwavering support to the 27-year-old.

"We saw the (images of the bite) afterwards and saw that there was a certain possibility of punishing the participants in that action: both (Giorgio) Chiellini and Suarez," Tabarez said. "I don't deny that we were waiting a punishment. But we never imagined the severity of the punishment meted out.

"Before and after the Suarez-Chiellini episode, we have seen things measured with a completely different meter.

"(This decision) is much more focused on the opinions of the media - the media that attacked immediately after the conclusion of the match. At the press conference, the only topic journalists spoke about was that one. I don't know what their nationality was but they all spoke English.

"As a coach and as a professor - I have also been a teacher in my life - I am presented with the theory of the scapegoat. We agree with the basis of (the punishment), obviously, but there is a danger in proceeding this way. Many times, you tend to forget the scapegoat is a person that has rights.

"With this decision, who wins or who won? Who loses? Who was benefited? Who is harmed? Who ended up getting things their way?"

Tabarez ended his monologue with a message for Suarez, before departing the Maracana auditorium to a standing ovation from several Uruguayan journalists.

He added: "To conclude, to Luis Suarez, to Luis Suarez the person, who has lived with us and worked with us, someone we know better than anyone else, he will never be alone."

Suarez returned to a hero's welcome from hundreds of fans at Montevideo airport, from where he was whisked to his mother's home in the southern province of Canelones.

The Uruguayan FA has confirmed its intention to appeal sanctions against Suarez but the striker stands to be suspended until the end of October.