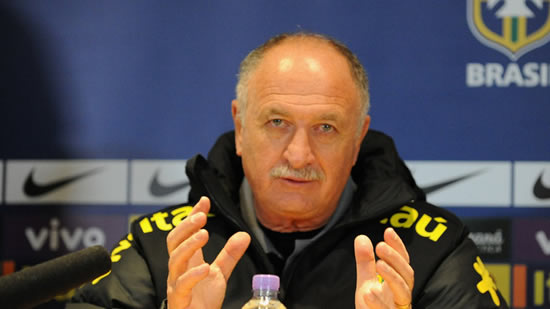 Luiz Felipe Scolari: Brazil boss will decide his future after the World Cup is over

Scolari has been under fire from sections of the Brazilian media following his side's 7-1 hammering by Germany in the semi-final of the competition.

The home team capitulated in the opening half-hour of the match when they lost five goals during an 18-minute spell.

Thomas Muller opened the scoring on 11 minutes before Miroslav Klose doubled the lead on 23 minutes, while a brace from Toni Kroos and a Sami Khedira strike put Germany five goals ahead with 29 minutes on the clock.

The outcome was a record defeat in the competition for Brazil, who beat Germany 2-0 under Scolari's guidance in the only previous competitive meeting between the countries, the final of the 2002 World Cup.

Scolari said: “We did not expect to have a result such as the one we had yesterday. In terms of the number of goals conceded.

"We could win and Germany could win, both teams had very good skills and abilities. But of course a score like that with a lot of goals is going to go down in history.

"But we should also recall that after 2002 it was the first time Brazil ever reached a semi-final and therefore our work wasn’t so bad.

"We had a six-minute period when we had a disaster. This is not what we imagined or what we had in mind, but it happened.

"Now let’s work and organise our team for the Saturday game, which will be another important dream which is to end the competition in third place.

"We (coaching staff) have a deal with the CBF (Brazilian Football Confederation) until the game on Saturday and after that, probably, we will have a conversation to sort some things out."

Scolari added preparing his players for their final game of the tournament and not his own future was his primary focus.

"After the World Cup we will submit a report to the board of the CBF where you will see the good and the bad that we did and then it depends on the direction," he said.

"This is nothing going through my head right now.

"I will continue with my life, the players will also continue to be winners and we must continue - you can not end the life of the players for it."