Germany vs Argentina preview - Low: We can write history 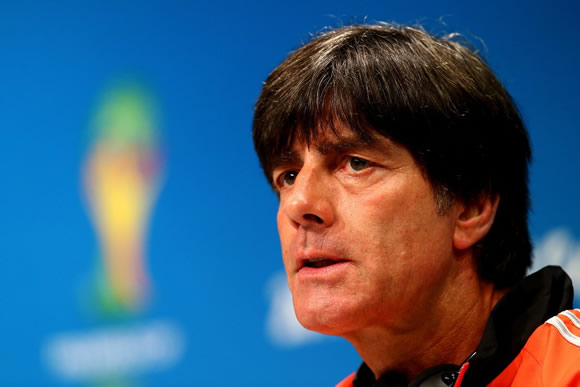 Fearless Joachim Low wants Germany to make history in the Maracana on Sunday and then dominate world football for many years to come.

After their 7-1 demolition of Brazil in the semi-final, Germany are big favourites to beat Argentina and win the World Cup in Rio.

If Germany are successful, it will be fourth time they have won the famous trophy - but it will be the only occasion they have triumphed on South American soil.

Indeed, no European nation has won the tournament on this continent in four attempts.

Czechoslovakia and Holland reached the final in 1962 and 1978 respectively, but Low hopes his team can go one better in Brazil this weekend.

"In the past we never had this, so we know we can write history," the Germany coach told a press conference on the eve of the final.

"Latin Americans, on this continent, have dominated all the time. So why can we not be the first?

"This could be considered an additional joy for us if we were to win as Europeans on Latin American soil."

The ruthless way in which Germany ripped Brazil apart in the semi-finals sent shockwaves through world football.

Toni Kroos, Thomas Muller, Bastian Schweinsteiger and Sami Khedira were all outstanding - as was 23-year-old Andre Schurrle, who came off the bench to score a fine brace.

If the Germans win again to lift the World Cup on Sunday, Low is convinced it will not be the last time his players do so.

With an average age of 26, this Germany squad is the sixth youngest in Brazil. And two of their rising stars - Ilkay Gundogan and Marco Reus - are both missing through injury.

Low thinks the potential is there for Germany to dominate world football - just as Spain did when they won three successive major trophies, starting with Euro 2008.

"We have players right now who are playing at their peak, but we have young players also in the squad and others who aren't even here," Low added.

"We have players with a fantastic future: Gundogan, Reus, (Mesut) Ozil, Schurrle, Muller... they can go on to play for a number of years.

"We can play on top of the world for a good few years yet, with some young players coming in to reinforce the team."

Ever since Germany hammered Portugal 4-0 in the group stages, they seemed destined to make Sunday's final.

Their only scare came in the second round when they needed extra-time to beat Algeria, one of the surprise packages of the tournament.

As a result, Low is full of confidence ahead of the biggest fixture in his managerial career.

"We don't have any fear whatsoever," the Germany coach said.

Low's optimism is also born out of the fact that he has done everything possible to get his team ready for Sunday's game - both physically and mentally.

The Germany coach and his backroom staff scoured the planet on scouting missions well before the tournament began and they have been working on a plan to defeat the Argentinians ever since they swept Brazil aside in Belo Horizonte.

"Over the last few years we've travelled and watched international football, in Europe and South America, and we've tried to learn little things that can influence matches," Low said.

"We've taken on the new-fangled things that are being done. We have looked at Spain and we've looked across the border at what the Dutch are doing - how they train individual players."

Argentina are hoping the echoes of their last World Cup success have a triumphant note.

Alejandro Sabella, the former Sheffield United and Leeds player who is now Argentina coach, admitted there are uncanny similarities between the team who Diego Maradona led to glory in 1986 and his side, with Lionel Messi occupying the role of talisman.

He has even taken advice from Carlos Bilardo, who was Argentina coach 28 years ago in Mexico when they beat West Germany 3-2 in the final.

"We [he and Bilardo] spoke about the importance of midfield, giving solidity to a team. You need to play continuously in the World Cup, and you have to be solid mentally and physically, with the right mindset."

Sabella said Germany may have an advantage having played their semi-final against Brazil a day earlier, and also not having had to play extra-time.

He pledged, however, that Argentina will sacrifice every last ounce of energy against the Germans in their quest to bring home the World Cup for their country.

He added: "This is a factor in favour of Germany, undoubtedly.

"But we'll give our best, through humility, sacrifice, hard work, being down to earth and giving before receiving. We will give our all so that Argentina can be a champion once again.

Sabella will give Angel Di Maria until just before the match before making a decision on his fitness after the Real Madrid winger suffered a torn thigh muscle.

Di Maria has been having stem cell injections to speed up his recovery and Sabella said: "We'll see on Di Maria. We have special things planned for him. I'll have a better idea after we've trained."