Argentina’s perfect 10 has the world at his feet, although head and heart will be tested by the pressure of expectation

Back in Buenos Aires, a video has surfaced over the past few days of the victorious Argentina team after their game against Switzerland and the celebrations in the dressing room as Alejandro Sabella’s players stood on their benches, banged the lockers, twirled their towels and belted out a song that probably offers a good insight into what it would mean to them to win the World Cup this side of the border.

It is called Brasil decime que se siente – Brazil, tell me how it feels – and the supporters who made it up, and can now be found in that cavalcade of beaten-up vans and sleepers along Copacabana, will tell you they came up with the lyrics specifically for this tournament. 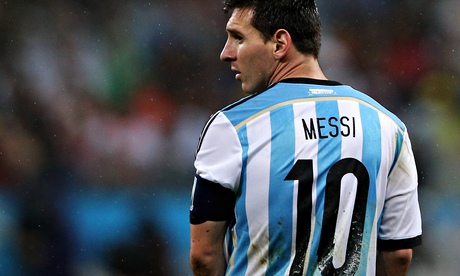 Brazil, tell me how it feels/To have your daddy [Argentina] in your home/ I swear that however many years pass/We will never forget/That Diego [Maradona] out-skilled you/That Cani [Claudio Caniggia] surprised you/You’ve been crying from Italy until today/You are going to see [Lionel] Messi/The World Cup will be ours/Maradona is greater than Pelé

That reference to Italy goes back to the 1990 World Cup, the last time Argentina reached the final and had the chance to see their name engraved into the malachite base of the 18-carat lump of gold – 36.8 centimetres high, 6.1 kilograms – that will draw our gaze in the Maracanã lights on Sunday night. Caniggia had scored the winning goal, from a Maradona pass, in a last-16 tie against Brazil that finished with Branco, one of the defeated players, claiming Argentina’s back-room staff had put tranquillisers in his drink. Maradona, years later, confessed to the “holy water” scandal and Branco threatened to take it to the courts. Even ignoring all the other sporting enmity, it is not difficult to understand why some Brazilians have chosen to sell their tickets rather than risk putting themselves through an ordeal of blue and white ticker-tape. Or why A Tarde newspaper led with a front-page headline of O Pesadelo Continua (The Nightmare Continues) after Argentina had reached the final. Especially when the Argentinian fans will also be holding up seven fingers and chanting siete in honour of the most wild and eccentric result of this tournament.

Germany, however, may just remind Argentina which nation invented schadenfreude. A victory parade has already been provisionally arranged for Berlin and Joachim Löw’s team have played with enough distinction to merit their position as marginal favourites. They have to be after that night last Tuesday when Brazil were systematically dismantled and Wolfgang Niersbach, the president of the German football federation, talked of seeing “football from another galaxy”. They have the greater momentum. They should be the fresher side and, more than anything, offer the clear sense that this is their time. “We’re in top shape,” Bastian Schweinsteiger said. They should also be popular winners bearing in mind what it shows can happen when a nation applies joined-up thinking to forward planning. “We have no fear whatsoever,” Löw added.

A study by Cambridge University Press, analysing millions of words from various media sources, has just come up with the top three adjectives that have been used to describe the 32 teams in this World Cup. Germany’s are “powerful”, “focused’ and “committed” (Argentina: “confident”, “flair” and “unconvincing”). Yet the pot of superlatives almost ran dry when Júlio César was beaten seven times at Estádio Mineirão and the crowd in Belo Horizonte ended up doing olés to every German touch. Niersbach picked three words of his own. “Historic, sensational, a fairytale – and they are all too weak to do it justice.”

Germany still have to devise a way to negate Messi’s threat but Löw quickly made it clear that he was not going to be as fixated on this as Holland were in the semi-final. “This team is not only about Messi,” he pointed out. “If you believed it was, you would be making a mistake.” And, besides, this is not Messi playing at the point of maximum expression. Not on recent evidence, anyway.

That might sound a little harsh when there did not seem too much wrong with the Barcelona player in the group games, when he was busily setting about making traffic cones of defenders and showing that uncommon ability to find his way to the opposition goal.

Messi has been nominated for the Golden Ball, the trophy for the World Cup’s outstanding player, on the back of those performances and the quarter-final against Belgium will linger in the mind because of that moment when he tried an implausible pass and the ball rolled to its target with the delicacy of speed and angle that might usually be found on a bowling green. Messi reminded us that day that a pass can be every bit as beautiful as a 30-yard shot into the top corner, or a dribble through the opposition defence. It was a swish of the left boot that made you want to punch the air. The ball was angled between two opponents in the centre circle. It seemed to pick up speed and teasingly eluded Vincent Kompany before arriving at the exact point where Ángel di María’s sprint had taken him. File it with the already bulging portfolio of great Messi memories and be aware that if the expectations on him sometimes feel too onerous it is only because we are so in thrall of his greatness.

Before the same game there was a wonderful photograph taken from behind Messi as he waited in the tunnel and the entire line of mascots seem utterly transfixed by his presence: eyes sparkling, mouths open, some daring to give a thumbs-up, but mostly just gazing at their hero. Messi can make grown-ups feel the same. We yearn for the ball to be on his left foot, when the noise of the crowd suddenly changes and there is that exhilarating sense that anything might happen, so keep your eyes on him very closely.

And yet nobody contradicted Gary Lineker, a previous winner of this competition’s Golden Boot, when he met a few of us football writers at his hotel on Ipanema beach last Friday, with some of the best views of the morning surf, and confessed to feeling marginally let down by the way Messi’s tournament had started to drift.

Lineker recalled what it was like to play with, and against, Maradona and mimicked the open-mouthed, starstruck faces of what it was like, even for members of football royalty such as Zico and Michel Platini, when they were on the same pitch. “It’s not meant as a pun but his left foot could manipulate the ball as if it were a hand,” he recalled. Yet not even Maradona was immune to the pressures. Jorge Valdano, his team-mate in 1986, recalls how Maradona was so emotionally wrought before the final he broke the dressing-room silence to ask to telephone his mother. “Tota, come and help me, I am afraid, you must help me.’”

What none of us can say, or even begin to understand, is how Messi is coping behind that inscrutable face. He normally gives the impression that everything washes over him. But Lineker was correct: something is not quite right. The flashes of brilliance have started to become more and more sporadic. The joy is not so apparent in his feet. Against Holland, it was rare to see him so static, missing the usual dynamism, no longer making those quick, driving runs into the opposition penalty area. His father, Jorge, has blamed it on exhaustion, at the end of an injury-disrupted season, and the problem then is that there is no real cure other than rest. Unfortunately for Argentina, they have just endured extra time and penalties on a rain-soaked pitch, while Germany have had an extra day to clear their minds and soothe their limbs. Messi may have many gifts but a footballer – not even a superstar one – cannot just snap out of fatigue.

That is not to say Argentina are the one-man team that is often portrayed, just as it gets overlooked sometimes that Maradona played in the same team as Valdano, Jorge Burruchaga and Oscar Ruggeri. Messi, however, plainly represents Argentina’s outstanding chance of showing that their opponents are not flawless. Germany play a high defensive line and, if Messi is capable of sprinkling his magic on this final, that may be a risky strategy.

The flip-side is that Argentina do not really have any midfielders who have made a habit of breaking beyond the opposition’s defence in the way that, say, Toni Kroos and Thomas Müller have for Germany. Philipp Lahm’s switch to right-back has also given Germany a more assured look, defensively, for a couple of reasons. First, Lahm has the speed of thought and positional knowhow to help compensate for the fact that Germany do not have particularly quick centre-halves. Secondly, it has brought Sami Khedira into the holding midfield role. Lahm may be a superior footballer to Khedira but the Real Madrid player may be better for that position.

The disappointing part about Argentina is that a squad containing Messi, Di María, Ezequiel Lavezzi, Gonzalo Higuaín and Sergio Agüero (albeit with fitness problems for Di María and Agüero) have not done more to illuminate this competition. In fact, it has been some feat with that roll call to look so prosaic.

Sabella has built his team around defensive organisation, not taking too many risks and going by the theory that sooner or later one of their front players will wear down the opposition. Javier Mascherano, to use Schweinsteiger’s description, was‚ “the leader of a pack of wolves” against Holland. Unfortunately, it does not necessarily make for a great final.

Above all else, the occasion may need Messi to reinvent himself if it is to be remembered as a classic. In 1986, when West Germany and Argentina met in the final in Mexico, Maradona was approaching his 26th birthday, 16 months younger than Messi is now. Four years later, the two teams went head to head again and there is an old story that should be told about Maradona giving the Germany captain, Lothar Matthäus, a pair of boots before the game as a gift.

By half-time, the right boot had started coming apart at the seams. It was another classic piece of Diego. Now, it would be nice to think that Messi can leave his fingerprints all over this final, in the way we know he can. “He will be the player who will define the game,” Maradona said. “The only fear I have is that he is tired, but in the end, you cannot be tired.”