Farewell & good riddance - if Scolari has any pride he will resign 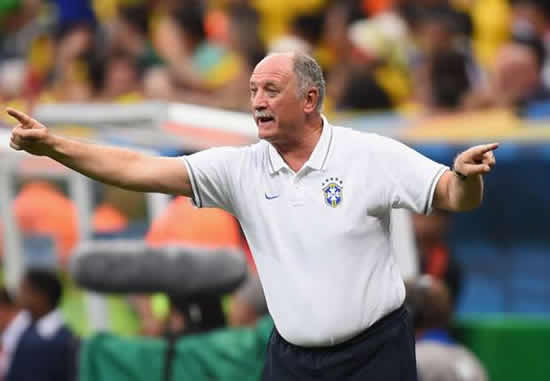 Luiz Felipe Scolari claimed in the aftermath that Brazil’s humiliating 7-1 defeat to Germany would not be repeated in 1000 years – but at one stage it felt like they might suffer a similar fate just four days after the most embarrassing game in the country’s history.

The hosts were spared the ignominy of another massacre but Saturday night’s 3-0 defeat to Netherlands in the third-place play-off game in Brasilia will surely be the final straw for their coach.

It comes to something when a three-goal defeat for the five-time world champions barely registers.

Scolari has been adamanat that he will not step down from his position in the wake of the World Cup and insisted with shocking arrogance that he should not be held responsible for this summer's failure. He has also been backed by CBF president elect Marco Polo Del Nero, who told local newspapers: "For me, he stays."

Yet Del Nero might have had a change of heart when he heard the chorus of boos for Scolari when his face appeared on the big screen at the Mane Garrincha stadium as 70,000 people spoke for the 200 million in this country. The jeers were even louder when the Brazil squad sheepishly saluted the fans after the final whistle. This was not how it was supposed to end.

Scolari spoke before the Netherlands defeat about restoring pride to the nation but, if the 65-year-old had any pride himself, he would have stepped down immediately after the Germany catastrophe in Belo Horizonte.

Felipao is tainting his reputation by the day as he clings on to his job and will now be remembered as the man who brought Brazilian football to its nadir, rather than the coach who led them to World Cup glory in 2002.

From leaving the likes of Philippe Coutinho and Lucas Moura out of the 23-man squad, to persisting with Paulinho for far too long, to sending out sides with no semblance of a gameplan other than to give the ball to Neymar; everything has unravelled for Scolari over the last month.

He has reiterated time and again that the semi-final was a freak, unlucky result but he lost one of his excuses within two minutes on Saturday night.