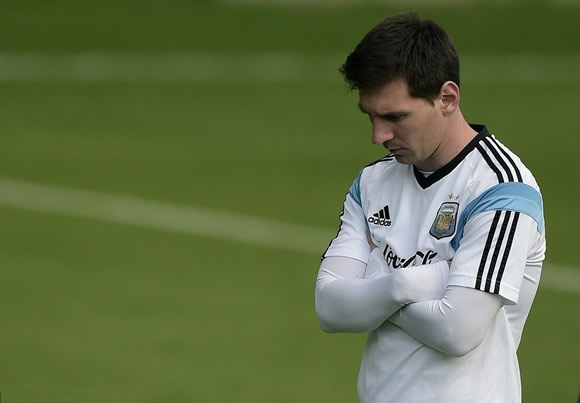 Argentina coach Alejandro Sabella claims his side will need to play a perfect game to overcome favourites Germany and win the World Cup for a third time in Rio de Janeiro on Sunday.

With thousands of fans streaming over the border - their number swelling after every round - there is a mood of real optimism around the Argentinian camp.

But in order to complete their dream - winning their third world crown in the spiritual home of their biggest rival - Sabella knows it will take another herculean effort.

"We have to remain very concentrated and close all the spaces open to them. Most importantly, we can't give the ball away cheaply," said the 59-year-old.

"Germany are always very strong physically and tactically. For that reason they are the team that has won most titles along with Brazil and Italy.

"They use the ball very well and play the ball between the lines. They also use the space behind full-backs very well, especially with (Philipp) Lahm. We have to play a perfect match."

Sunday's meeting will be the third time the two countries have met in a World Cup final with Argentina winning 3-2 in 1986 and West Germany gaining revenge 1-0 in 1990.

Argentina captain Lionel Messi is hoping to emulate Diego Maradona's feats in '86 to ensure his place amongst the greatest players of all time and Sabella hopes the omens are good for a repeat result.

"It is true there are certain parallels and we hope the situation repeats itself against a very strong opponent," he said.

To the contrary of what was expected from Sabella's side before the tournament, Argentina have reached the final based on their strong defensive record having managed to not concede in 330 minutes of football in the knockout stage.

And he hailed the tactical discipline of his side, which has compensated for their lack of firepower due to injuries suffered by Angel di Maria and Sergio Aguero.

"It is to the great credit of the players who have worked very hard," he added.

"The formation has also changed which has allowed us to protect the full-backs more and close off the space. That has given us more balance."