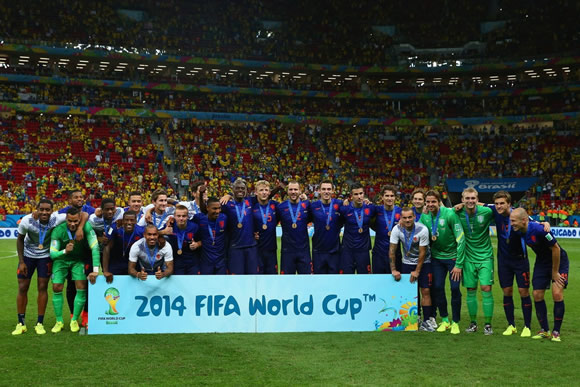 Brazil were booed off the pitch in Brasilia as their disappointing World Cup campaign ended in another humiliating defeat.

Robin van Persie, Daley Blind and Georginio Wijnaldum gave Holland an easy 3-0 win in a third-place play-off that was riddled with defensive errors from the hosts.

David Luiz, who performed poorly in Brazil's 7-1 semi-final defeat to Germany, gave another masterclass in how not to defend.

The Brazil vice-captain headed the ball straight to Blind in the first half and he lashed the ball past Julio Cesar for Holland's second goal.

The match started in the worst possible way for the hosts, who went behind within three minutes thanks to Van Persie's penalty, and Wijnaldum wrapped up the latest humiliating defeat for Brazil in injury time.

After a poor first-half showing, Brazil improved slightly after the break, thanks mainly to the efforts of Oscar, who was booked for diving when he should have been awarded a penalty following a challenge by Blind.

Louis van Gaal's men were strong in defence all night, though. The same could not be said for the hosts, who were jeered after watching their team suffer back-to-back defeats on home soil for the first time since 1940.

Before kick-off the Brazil supporters inside the stadium heeded Silva's pre-match call for them to get behind the team.

The presence of the injured Neymar as a spectator on the bench also raised the spirits of the home fans as they took their seats.

But all the good will disappeared very quickly.

With 87 seconds on the clock Van Persie played Robben in behind the Brazil defence and Silva pulled the winger back, sending him tumbling to the floor.

The foul took place two metres outside the box, but referee Djamel Haimoudi pointed to the spot.

Much to the shock of the Holland team, the Algerian official only produced a yellow card even though the Brazil captain was the last man.

Van Persie took the ball and beat Julio Cesar. A stunned silence descended upon the Estadio Nacional in Brasilia.

Dismay turned to anger soon after as Holland doubled their lead thanks to some poor defending by Luiz.

The defender headed backwards, rather than over his own bar after a cross by Jonathan de Guzman.

The ball dropped straight to Blind, who took one touch and lashed the ball past Julio Cesar to register his first international goal.

Oscar looked to be Brazil's only hope of pulling a goal back.

The Chelsea midfielder tested Jasper Cillessen, but then let himself down by diving to win a free-kick, which Jo wasted by heading over.

When the half-time whistle came, the home fans booed loudly.

Scolari replaced Luis Gustavo with Fernandinho. Within nine minutes of his introduction he was booked for a late tackle on Van Persie, who was left clutching his knee on the turf.

Another substitute, Hernanes, slid in on Robben, but he escaped a booking.

Oscar remained the hosts' best player. The midfielder found his Chelsea team-mate Ramires with a clever pass but he dragged his shot wide under pressure from Ron Vlaar.

The Aston Villa captain handled Maicon's cross in the box just after the hour, but Haimoudi waved away appeals for a penalty.

The Algerian referee was at the centre of controversy again in the 67th minute when he booked Oscar for diving. Replays showed Blind had actually taken the Chelsea man out in the box. Indeed the clash of knees was so strong between the two players that Blind was carried off on a stretcher.

Van Gaal then thought his team should have had a penalty when Robben went down in the box under pressure from Fernandinho, but nothing was given.

The boos started five minutes from time as Brazil could not get the ball off the Dutch.

There was no lap of honour for the hosts as they trudged off down the tunnel with the heads bowed in shame.