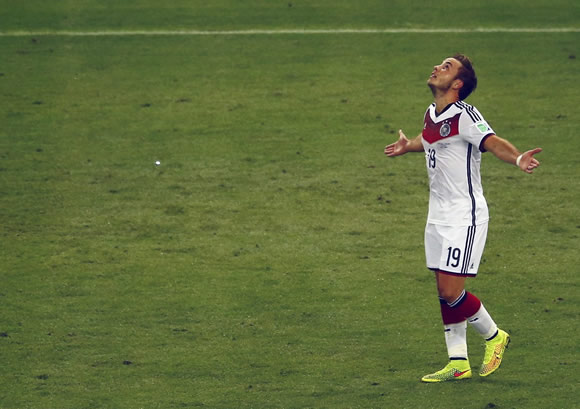 Germany were crowned world champions for the fourth time thanks to a stunning extra-time winner from super-sub Mario Gotze.

Argentina were preparing for a penalty shoot-out in the Maracana, but in the 113th minute Gotze chested down Andre Schurrle's cross and volleyed home to cap an historic victory for the jubilant Germans.

It will take a while for Lionel Messi, Gonzalo Higuain and Rodrigo Palacio to forget this defeat.

They were all guilty of missing good chances to give Argentina what would have been a glorious win in the home of their fiercest rivals Brazil.

Tens of thousands of Argentinians had flooded Rio hoping to see Messi inspire his team to their third World Cup win.

This was Messi's chance to put himself on a par with his idol Diego Maradona.

But unlike in 1986, when Maradona captained Argentina to victory against the Germans, this was the Mannschaft's night.

And there would be few who would argue they did not deserve it.

Ever since they swept Portugal aside 4-0 in their opening match, Germany have looked destined to lift the famous trophy inside this famous stadium.

Blessed with talent from one to 23, they are a brutal attacking unit also capable of keeping things tight at the back.

The 7-1 destruction of Brazil in the previous round proved as much.

And in Low they have a coach who has answered his critics by becoming the first man to lead a European team to World Cup glory in South America.

It did not take long for this game to live up to its pre-match billing as the ball flew from one end to another amid a backdrop of raucous noise, particularly from the Argentinians.

Higuain shot wide from a tight angle early on and Messi used his trickery to prize open the Germany defence, but Bastian Schweinsteiger put in a block.

Higuain then missed a glorious chance. Toni Kroos headed the ball over his own back four towards Higuain, who watched the ball drop perfectly on to his right foot.

Despite being two yards ahead of the chasing Mats Hummels, the Napoli striker dragged his shot wide. Argentina coach Alejandro Sabella was stunned. Substitute Sergio Aguero was so embarrassed for his team-mate that he pulled his training top over his head.

Higuain thought he had made amends when he tucked away Lavezzi's cross, but he was offside Cristoph Kramer, who had taken a knock to the head earlier, hobbled off and was replaced by Schurrle.

The first half came to a dramatic conclusion.

Messi squeezed the ball past Neuer, but Jerome Boateng cleared off the line.

And Benedikt Howedes hit a post with a header from Kroos' corner.

Less than 90 seconds after the restart Messi found a way through the Germany defence, but he dragged his shot a foot wide when he should have scored.

Neuer had to revert to the sweeper role he performed against Algeria as he came right to the edge of his box to punch a long ball by Zabaleta, taking Higuain in the process with his knee.

A dazed Higuain, holding his head, demanded a penalty, but the referee waved play on.

Mesut Ozil and Schurrle lost control of the ball in the box with the goal gaping.

As the clock ticked towards 90 minutes, both teams started to take fewer risks.

Even a moment of magic from Messi was foiled by Neuer who came racing off his line to smother the ball after the Argentina captain has skipped past four defenders.

With nine minutes left Kroos placed a low shot wide, much to the annoyance of Low.

Klose's record-breaking World Cup career ended when he was substituted for Gotze in the 88th minute.

Gotze sent a weak shot into Sergio Romero's arms and the game then petered out until the referee blew to signal the end of 90 minutes.

Sabella tried to fire his men up with a motivational team-talk just before extra-time but it was Germany who came out stronger.

Argentina were almost a goal down when Muller returned Schurrle's pass and he fired a strong drive which Romero did well to parry.

Argentina had their big chance moments later when Hummels failed to clear a routine cross. The ball fell for Palacio, but his lob went wide.

Aguero drew blood from under Schweinsteiger's right eye as they jumped for the ball.

Then the killer moment came that won the Germans the World Cup.

Unlike many of his team-mates, Schurrle still had plenty of energy left in the tank.

He raced down the left-hand side past three Argentinians and crossed for Gotze who cushioned the ball on his chest swept the ball past Romero from close range.

It was a wonderful strike worthy of winning any tournament. The Argentinians inside the Maracana fell silent. Their party had been gate-crashed.