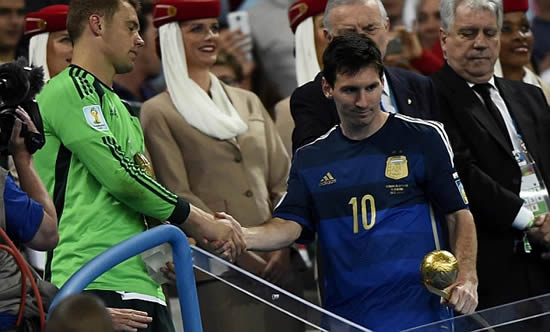 Lionel Messi saw his dream of becoming a world champion slip through his fingers in extra time at the Maracana. The Argentine star failed to step out of Maradona's shadow, but had the small consolation of walking off with the Golden Ball award for the player of the tournament.

The Barca man's poor display in the final had a significant part to play in the dashing of his dreams. Aside from a few fits and starts, he was anonymous, and he squandered a clear chance to break the deadlock shortly after half-time, dragging his effort wide.

Messi's form petered out as the World Cup wore on, until eventually he practically vanished in the latter stages.

It was a similar story against the Germans. He looked really up for it early on, striving to make something happen when he got the ball, but ultimately his performance boiled down to a handful of runs and a crucial miss.

The Golden Ball will do little to soften the heartbreak for the 27-year-old, who was desperate to strike gold with his country.