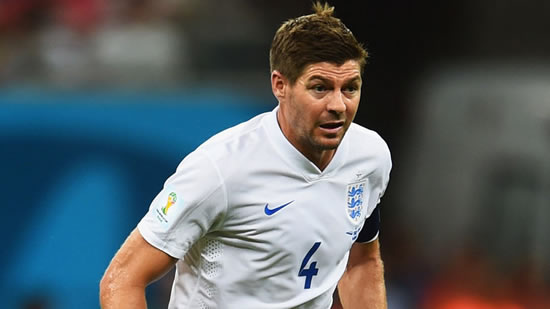 The Liverpool midfielder quits as his country's third-most capped player having made 114 appearances over a 14-year international career.

Gerrard delayed a decision on his future in the immediate aftermath of this summer's World Cup, but a substitute's appearance in a 0-0 draw with Costa Rica in Belo Horizonte will be his last in England colours.

"I have enjoyed every minute of representing my country and it is a sad day for me knowing that I won't pull on the England shirt again," said the 34-year-old, who will take up a role as an FA ambassador.

"However, I do look forward to continuing my strong relationship with the FA and helping out in any way I can going forward.

"I'd like to firstly thank my family and friends for all their support throughout my England journey. I'd also like to thank everyone who has been part of my international career, from the England managers I've played under to the staff at the FA and, of course, all the players I've been fortunate to play alongside.

"In particular, the supporters have been amazing, not least in Brazil when they got behind the team despite the disappointing results.

"I'd especially like to thank Roy Hodgson, firstly for giving me the captaincy permanently when he took the job, making me the proudest man in the country and allowing me to fulfil my childhood dream.

"He has been very understanding over the past few weeks and is a man I will always hold in the highest regard.

"This has been a very difficult decision, one of the toughest I've had to make in my career. I have agonised over this since coming back from Brazil and have spoken to family, friends and people close to me in the game before coming to this point.

"Most importantly, Brendan [Rodgers] has been fantastic and obviously I have to look after my body as much as possible to ensure I can give everything when I take to the field.

"To ensure I can keep playing to a high level and giving everything to Liverpool Football Club I believe this is the right decision, and having Champions League football back at Anfield is another big factor in my decision.”

Gerrard made his England debut against Ukraine in May 2000 and went on to captain the side 38 times, earning two England player of the year awards along the way. 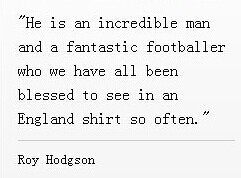 Hodgson said: "While I’m disappointed in the decision, I can entirely understand Steven’s situation and can have no complaints given the incredible service he has given to his country.

"I must respect his wishes due to the discussions we have had and the amount of thought and consideration he himself has given it.

"He is an incredible man and a fantastic footballer who we have all been blessed to see in an England shirt so often."