Lionel Messi stifled but he can still light up the final

This was a difficult and at times rather painful night in São Paulo: for those watching this turgid, tactically constipated semi-final between Holland and Argentina, for the Dutch players who ran hard for 120 minutes but were beaten on penalties, and before that glorious ending for Lionel Messi too, a star of this tournament, but suffocated here by a meeting of two teams set above all on not losing the half-share in the World Cup final with which they started the match.

After the winning penalty kick had been slotted Argentina’s players went to their supporters and danced wildly, whirling their shirts above their heads. Messi, bashful as ever, hung back, walking a joyful lap of honour on his own. It had just been that kind of evening. Comparisons with Diego Maradona – another time, another game – have become tedious by now, but they will keep coming. 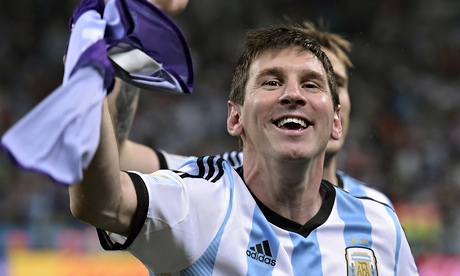 Messi left no real imprint on this semi-final, but he has a final now against El Diego’s own grandest opponents to decorate with his World Cup-worthy talent. After a deeply uninspiring match here it is to be hoped for the sake of the spectacle that both teams come to win rather than avoid defeat, and that the attacking talent both have is allowed to breathe.

If Argentina’s star was restrained here, there were perhaps other factors in play. Occasionally the competitive bubble is pierced and it had been a trying 24 hours for Messi whose friend, the journalist Jorge Lopez, was killed in the early hours of the morning in a car crash in São Paulo. Football goes on, of course, and Messi is nothing if not the most relentlessly focused of professionals. Here the challenge was clear.

One by one the poster-boys have fallen away at this most pop-ish of world cups, but tenacity has always been a key Messi-ism, and here he was among the last men standing as ever, with only this disciplined, muscular Holland between the world’s best player and a World Cup final to match his talents.

In the event a game of no shots, no incident and a crushing sense of caution dawdled on, with Messi for much of the match in a kind of holding pattern, circling amiably. This stillness has been a feature of his World Cup, the ability to wait for his moment and pounce as he did here against Switzerland. And yet, at times, as Holland pushed forward more aggressively, with Arjen Robben by now the game’s most visible presence, it was hard to avoid the feeling that the world’s best player should influence a match like this more than he did.

Who to blame for Messi’s peripheral presence? Certainly the tactics of both teams, with at times three Dutch players around Messi in possession, hardly helped. It will be argued that great players – and Messi is a great – will often find a way to influence the most moribund game, as here when all 20 outfield players seem to have emerged in blinkers. But it is only the effects of hindsight that make us imagine Maradona or Johan Cruyff affected very match they played in. At times the space is simply too tight, the hustle in those central areas too relentless, as it was in this semi-final that never really was.

And so, at the end of 120 minutes of something that resembled a groggy second cousin of high-grade tournament football, the game went to penalties. The first really loud cheer of the night arrived with the first kick of the shootout, a miss for poor old “Concrete” Ron Vlaar. Messi put the next one away with ease. And that was pretty much that on a night that, for all its slow-burn caution, ended in unbounded celebrations by the relentlessly boisterous Argentina fans.

The Arena Corinthians was rocking at the start as Messi kicked the match off – and immediately began to walk, as he does now, taking up an advanced lurking No10 position up against Holland’s three man defence. This has been the way of Messi’s tournament in the last few matches as he has evolved into the tournament’s most notable passive-aggressive influence, a player whose mere presence on the pitch has affected the texture of Argentina’s matches. It could be said Messi has done as much as anyone to protect his less-than-perfect defence, the need to double-team the world’s best attacker applying a discreet hand-brake to the opposition’s attacks.

With Nigel de Jong fit again the suspicion before kick-off was that Louis van Gaal would ask his gristliest midfield pivot to stay close to the game’s dominant personality. And here De Jong was at Messi’s side from Argentina’s first attack. At times Messi strolled, a flaneur between the lines. At others he dropped deep and knitted the play together like a mooching little regista. But there was little space, with the Dutch midfield and defence eliding into a six-man anti-Messi block.

Although if Holland were cautious here so too was Alejandro Sabella, his customary fear of the counterattack gingered up by the presence of Arjen Robben. And so the match edged relentlessly towards its end-game. Messi, and Argentina, will need to produce a lot more to trouble to trouble Germany. But for now that will be forgotten. A “Peak Messi” World Cup final is a gift it looked, for a while, as though football might miss out on. But here it is all the same, a chance for the greatest player of the modern age to sparkle on what remains the sport’s greatest occasion.