The Argentina manager, Alejandro Sabella, has admitted Germany’s freshness will hand them a considerable advantage in Sunday’s World Cup final after the South Americans overcame Holland to reach the showpiece for the first time in 24 years.

The goalkeeper, Sergio Romero, who worked under Louis van Gaal at AZ Alkmaar, conjured two saves in the shoot-out after the first ever goalless draw in a semi-final of this tournament to secure passage into Sunday’s game at the Maracanã. The Germans will have benefited from an extra day’s rest ahead of that match with Sabella, whose side had endured their second period of extra-time of the finals, admitting some of his players were “sore, beaten, tired as a result of a war”. 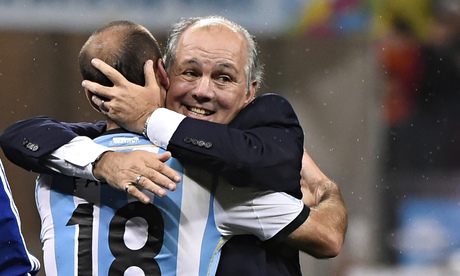 “Germany are always a very difficult hurdle to overcome, and even more so when they’ve had the extra day and, indeed, could rein themselves in for the second half last night,” said Sabella, referring to Joachim Löw’s side’s 7-1 thrashing of Brazil when the contest had effectively been settled by the break. “We’ve had to expend every drop of energy just to play in the World Cup final. So that is an advantage for them. In 1998 Argentina beat England in extra-time and lost against Holland in the heat of Marseille in the next match, and it harmed us. We have to recover and work to make sure we are ready.

“I have huge admiration for Germany. They have always shown physical might, tactical powers, mental force and have always had the players with a certain South American touch. They know what team-work is. They have been planning for a long time. They know about organisation. The match is extremely difficult, and they haven’t played extra-time when we’ve played two periods in this tournament. But all I can say is I’m thrilled. We’ve made it into the final and crossed the Rubicon. We’ll do everything possible to win this title now, and I’m thrilled with my players.”

Van Gaal, who will take up the reins formally at Manchester United after Saturday’s third-place play-off against Brazil, praised his players for contributing a “fantastic tournament” but suggested two of them had declined to take the first penalty in the shoot-out despite the team’s success against Costa Rica via spot kicks in the quarter-final.

“It should give you confidence, playing another one having just had a shoot-out, and we took those penalties in an incredible way against Costa Rica,” he said. “But the issue is you need to score the first one and I asked two players to take the first ball before ending up with Vlaar. I thought he was the best player on the pitch so should have a lot of confidence. It just goes to show it’s not easy scoring in a penalty shoot-out.”

The Dutch coach, already without the substituted Robin van Persie, had been unable to fling on his reserve goalkeeper, Tim Krul, at the end as he had in Salvador having already used all three substitutes. He duly watched as Argentina’s Romero, whom he had signed at AZ Alkmaar for £1.2m back in 2007, saved from Vlaar and Wesley Sneijder to knock his team out. “Argentina have top players, and we didn’t lose against them, but the penalties are down to luck,” he added before joking: “I taught Romero how to stop penalties, so that hurts.”