This was not Total Football. It was Attritional Football. And after losing on penalties, Arjen Robben, wearing the captain’s armband in the absence of the substituted Robin van Persie, looked bereft as he headed to the stands to comfort his distraught son.

One of only two Holland players to score their penalties, he has left his mark on this World Cup but, like Lionel Messi, failed to illuminate a dour semi-final. Messi, however, will get another go in Sunday’s showpiece. 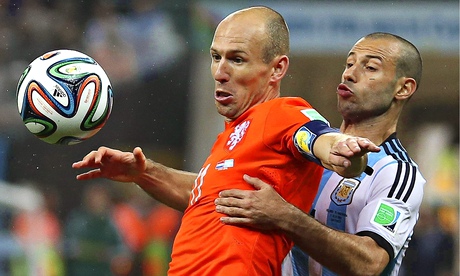 The buildup had focused on historic encounters between the two sides, with particular focus on 1974 and 1978, but the effective shackling of the most creative players on each side led to a tense, scrappy affair that drifted inevitably to penalties.

Messi and Robben both suffered but the Holland winger at least retained his momentum and toiled to inspire those around him. Louis van Gaal, with whom he goes back a long way, looked to him for one last effort.

As the teams switched ends after the first period of extra time, it was Robben – as against Mexico and Costa Rica – who tried to gee up his troops. He has carried this side, a combination of callow Eredivisie players and old heads, but the semi-final was a bridge too far.

Where Holland had begun in a flurry of goals and excitement with that 5-1 victory over Spain and then a stirring comeback against Australia, their matches have become increasingly stilted affairs.

They had failed to score in 240 minutes of football and, with Van Gaal having used all three substitutes by that point, there was to be no repeat of Tim Krul’s heroics in the quarter-final shootout against Costa Rica.

It told you all you needed to know about a tight match that Jasper Cillessen, who would stay on the field until the end this time but failed to save a single penalty, took on more players than Robben. That a goalkeeper’s party piece against Gonzalo Higuaín, which he repeated against Sergio Agüero in extra time, was a highlight was a good indicator that defences were on top.

Robben, on whom his country have come to increasingly depend, came into the match having made nine more runs into the box with the ball at his feet than any other player with 17. Here, he barely managed one.

Like Messi, he struggled for space and the ball. The tone was set early on when he received the ball on the left-hand side of the penalty are and almost immediately two players – Pablo Zabaleta and Lucas Biglia – converged on him.

After the sturm und drang, tears and total collapse of the previous night in Belo Horizonte, this was a return to cagey fare. Under leaden skies, both sides packed the midfield and sought a lucky break in the rain.

For Robben, who has done more than anyone to drag his side to this point, it was a frustrating experience. As Van Gaal shuffled his tactics to pack the midfield and stifle Argentina, he found himself isolated but still he kept going. As throughout a tournament that has yielded three goals and a consistency of performance that has endlessly caught the eye, he looked hungry. He started off on the left alongside Van Persie, before switching to the right to try his luck against Marcos Rojo. Frustrated, he went back to the left. Then, five minutes before half time, back to the right.

The congested midfield was preventing Robben and Messi from getting the ball in any space but while Messi looked insouciantly relaxed with the situation, Robben buzzed like an angry bee.

As the game drifted into extra time, it was Robben who tried to inject some urgency but the crowd of blue and white shirts did not yield.

With a minute of normal time remaining, he almost found the room he had been searching for but Javier Mascherano poked the ball away at full stretch as he shaped to shoot. It was Robben who had Holland’s first shot on target – in the eighth minute of extra time.

Van Persie, who played despite a stomach bug and the effects of rushing his rehabilitation to make it to Brazil, was a largely static presence. Robben, in contrast, plays on his toes. He wanted the ball at all times, but rarely got it.

Martín Demichelis, the Manchester City defender revelling in an unexpected international comeback, had done his best to wind up Robben before the match. He said that his former Bayern Munich team-mate “does not like physical contact” and was “not a fighter”. That might have been the popular perception but it has not been the case here. Demichelis earned a yellow card for yanking back Robben as they duelled throughout the second half. By the end there was mutual, grudging respect. With five minutes to go of normal time Demichelis poked the ball out for a corner, taking Robben out in the process. They clasped hands.

Yet following the penalty drama, it was Demichelis who had capped an unlikely personal resurrection with victory and Robben who was the last Holland player to walk silently down the tunnel with a sad shake of the head.