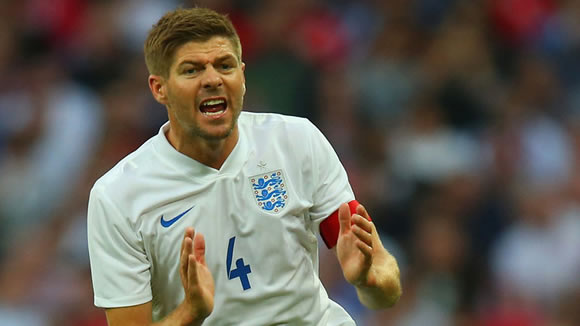 David Beckham has urged Steven Gerrard to stay on as England captain despite the team’s failure to win a game at the World Cup in Brazil.

Liverpool midfielder Gerrard will be 36 by the time the 2016 European Championship is played in France but is just two appearances short of breaking Beckham’s outfield record of 115 caps for England.

Former England captain Beckham told Sky Sports News: “Obviously I have been there. I played for England for quite a few years and captained England. But it’s one of the things I miss out of my whole career.

"I think it would be great if Steven continues because it was a disappointing tournament for the whole team and the captain kind of takes the real kind of brunt of things.

"But as a captain you feel a certain responsibility to lift the team. Stevie has done that for many years for Liverpool and for England. He has always been a real motivator, the way he plays and his passion that he shows on the pitch.

"I would love to see Stevie continue because I think these young players need someone to look up to and a mentor – someone that has been there and done it – and I think that Steve is a great captain. He has been for Liverpool and England.

"He doesn’t need my advice but one thing that I would say; that if you can play for England as long as you can, then do it.”